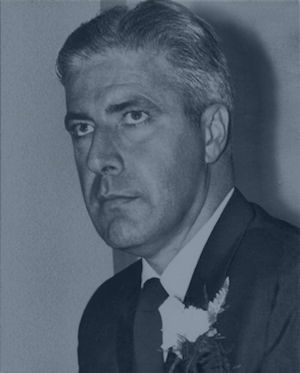 Under The Post-Journal headline, "Southwestern Wins CCIAC; Brian Hull Sets Two Records," is an article, more than 40 years old, which chronicles the Trojans' literal run past Fredonia Central School for the league track and field title.

In addition to the article, there are several photos from that spring day at Fredonia State College in 1973, including one from the 100-yard dash, another from the pole vault and yet another from a relay.

But the one that draws a reader's attention the most shows Southwestern's Brian Hull chatting with a middle-age man, who is holding a notepad and a pen.

To this day, Hull remains one of Western New York's greatest high school runners. What he likely couldn't have known then, but what has become apparent through the passage of time is that he was talking with one of the region's best sportswriters.

"Scrubby Olson was a stickler for details," wrote former Post-Journal sports editor Frank Hyde a few months later, "an outspoken, honest reporter who wrote it as he saw it. No man in this profession can do more."

"Nothing escaped Scrubby's attention," former JHS football coach Terry Ransbury said in 2013. "He was always around - locker room, practice field, games and telephone. I always felt he was harboring a great desire to be a coach."

And, in many ways, Scrubby was just that, a man who always seemed to be laying out just the right game plan for sportswriters who followed.

On Friday, Sept. 14, 1973, Scrubby covered JHS' 22-0 football victory at Dunkirk, highlighted by an 85-yard opening kickoff return for a touchdown by Manny Leeper.

In the wee hours of Saturday, Sept. 15, the 48-year-old Board of Public Utilities meter reader by day and sportswriter by night, was stricken at home and pronounced dead on arrival at WCA Hospital.

Steve Corey, a colleague of Scrubby's at The Post-Journal, eulogized in print a man he described as a "quiet sportsman."

"His words and thoughts on sport were always calm and measured," Corey wrote. "In high school sports, he was always more concerned about the individual personalities than about the team entities, always praising strongly and denouncing quietly. He never allowed his interest in sports to override his interest in what went to make up those sports: people."

In addition to JHS sports, Scrubby also covered track and field, golf and most of the Section VI basketball playoffs. Months after his passing, The Post-Journal established the Scrubby Olson Memorial Trophy, an award presented to the area basketball scoring champion. For more than two decades, boys and girls from The Post-Journal circulation area were honored for their hoops prowess, their names connected to a man who not only loved the game, but who also loved the young people who played it even more.

Corey only worked with Scrubby for a year, but the impression the latter left was indelible.

"Above all, I remember this," Corey wrote in his eulogy. "In the course of the year that I was able to call Scrubby a friend, I never heard him say anything that he couldn't say quietly. I never heard him raise his voice. Not once."

More than four decades later, however, Scrubby's voice is still being heard through the yellowed clippings of The Post-Journal.

"In my mind," Ransbury said, "his overall work was excellent and another reason to nominate him for the Chautauqua Sports Hall of Fame." 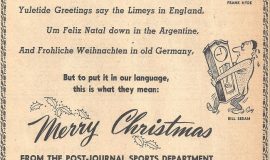 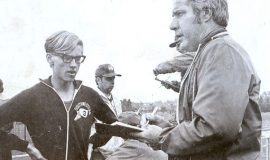 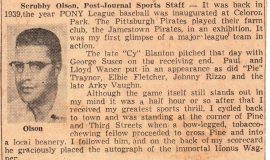 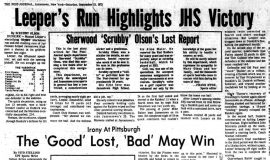