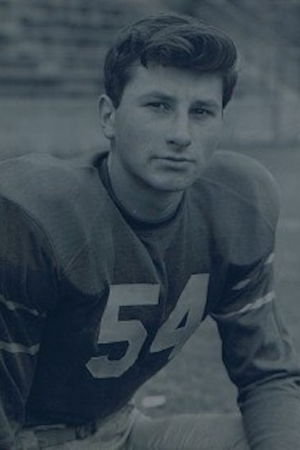 When success for the Jamestown High School football and basketball teams of the late 1940s is mentioned, the name of Donald Theodore "Ted" Olsen is also mentioned.

Olsen was born on November 11, 1930, in Jamestown and participated in sports throughout his childhood, starting at the Jamestown YMCA with HI-Y, table tennis and handball. He also played Church League basketball and was a quadruple letterman at JHS, earning varsity letters in football, basketball, track and baseball.

A highlight of Olsen's 1948 football season at JHS was a three-touchdown performance as the Red Raiders upset North Tonawanda in a game considered to be one of Jamestown's greatest ever.

In 1949, Olsen was selected for The Buffalo Evening News Niagara Frontier All-Star Team for his pass-catching abilities as a right end and his play as a defensive end.

Olsen also excelled in basketball for Coach Rolland Taft at Jamestown, earning additional recognition as a consistent scorer while playing on the 1948-49 team that won the Section 6 Class AA championship and also contributed heavily to the JHS baseball teams success that year as they collected their second Class AA title.

In addition to his athletic skills, Olsen also participated in band, orchestra, A Cappella and drama groups while at JHS.

Olsen was recruited to play college football by Michigan, Ohio State and Syracuse, with the latter giving him a scholarship. In mid-semester, however, he transferred to Alfred University where he played football until his induction into the Army, where he served as a medic, working with paraplegics who had been injured in battle.

After the service, Olsen played for the Jamestown YMCA varsity basketball team, which played several high-profile benefit games, including a 1955 game against a national team from the Republic of China and the Cleveland Browns football team.

Olsen was also selected as one of the Jamestown College All-Stars in 1954 which won the annual YMCA Basketball Festival that year.

Olsen returned to college at Alfred where he lettered in football, basketball and track while earning a degree in ceramic engineering

Olsen and his young family moved to California and remained there for seven years where he was employed at Rocketdyne and was involved in the development of the Apollo, Gemini and Skylab space programs, dealing with high-temperature alloys.

While in California, Olsen remained active in softball and basketball, playing on as many teams as his schedule would allow.

Upon returning to the area, Olsen became active in the community, serving as the chair or co-chair of the YMCA's annual membership drives. A fervent supporter of activities for children, especially those in need, his dedication led to his election to the Y's Board of Directors and he also served as the organization's president.

Olsen also was involved in the United Way for a number of years where he served in a variety of roles, including Orientation Committee Chairman. He was an active member of St. Luke's Episcopal Church, where he served as an associate vestryman, along with several other positions and worked to develop youth activities as a youth group teacher.

In 1979, Olsen put together a church softball team at St. Luke's, its first in 16 years. Olsen pitched for the team and coached. During a game on August 3, 1979. while running to second base, Olsen suffered a massive heart attack and passed away at the age of 48.

Upon learning of his passing, the flag at Jamestown's city hall was lowered to half-mast in tribute to his many contributions. Following his untimely death, the Jamestown YMCA established the Ted Olsen Memorial Scholarship, which was to be awarded to needy children. In addition, the Westside Panthers created a Ted Olsen Memorial Award to be given out to their Most Valuable Player. 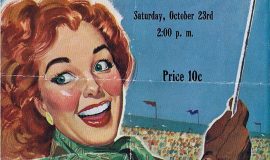 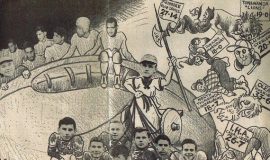 A newspaper cartoon before the 1949 JHS season finale. Courtesy the Olsen family. 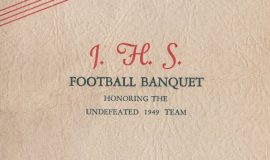 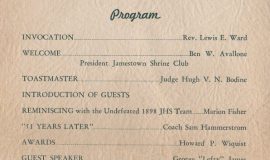 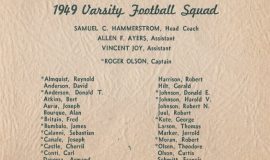 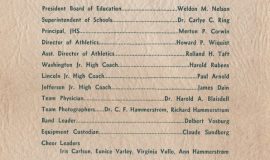 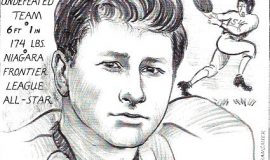 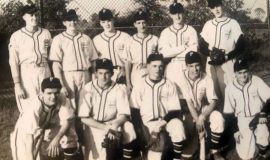 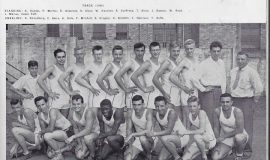 1949 Jamestown High School track team. Ted Olsen is in back row, fifth from right (with glasses). 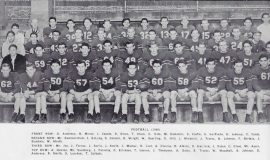 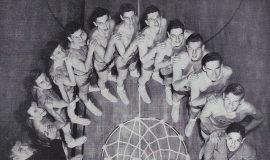 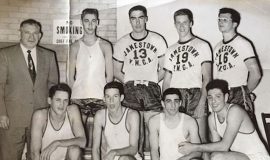 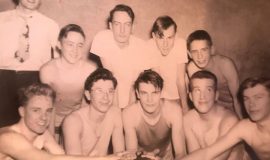 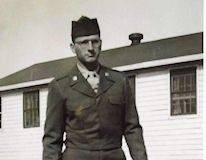 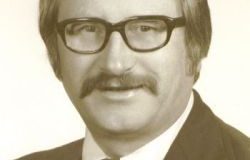 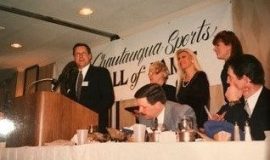 Chris Olsen accepts induction on behalf of his late father, Ted, at the 1999 banquet along with Ted's wife Jan Present, and Ted's daughters, Sharyn and Cindy. 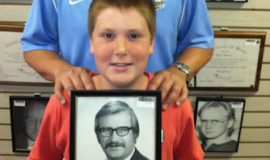 Chris Olsen and his son Ted posing at the CSHOF June 2014 with a photo of Ted's grandfather & namesake,Ted Olsen. Photo by Scott Kindberg. 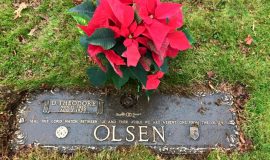 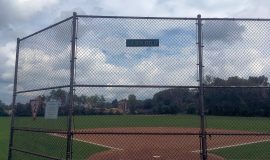 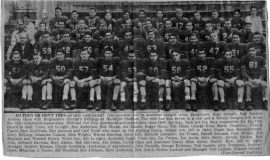 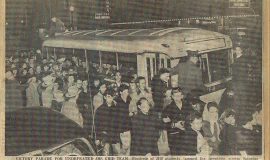 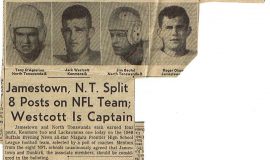 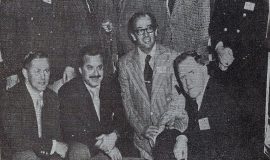 On July 13, 2018, Chris Olsen presented at Chautauqua Institution's the Hall of Philosophy. This was part of Chris' book launch on "Lucy Comes Home." It dealt with the Feb. 6-7, 1956 return of Lucille Ball with Desi Arnaz to her native Jamestown for the world premiere of "Forever Darling." Chris is the son of CSHOF inductee Ted Olsen.