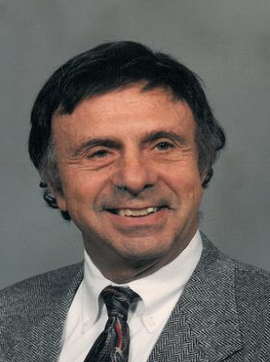 The son of Basil and Carmella (Rizzo) Raffa, Tom was born on January 11, 1931 in Jamestown, New York. Tom was a graduate of Jamestown High School where he was president of his senior class, a member of the National Honor Society, Chi Sigma Fraternity, and was voted Best All Around class member his senior year. Tom was an outstanding performer for the Jamestown Red Raider as he recorded seven varsity letters with three each in football and track and one in basketball before graduating in 1949. In football, Tom was very versatile as he performed on offense at fullback and halfback, on defense as cornerback plus was a kicker on the kickoff and punt teams.

Tom recorded several top-notch rushing games and led the Red Raiders in kick-off returns. In 1948, he was second in the Niagara Frontier league in scoring and was instrumental in the 33-18 upset in North Tonawanda before 5,000 spectators. Tom tossed a 13-yard touchdown pass as a running back and hit pay dirt from the 4-yard line ending Tonawanda's nine game winning streak.

Tom played a year of varsity basketball under coach Roland Taft which resulted in a Section Six Championship. He was a member of the Jamestown sophomores that compiled an outstanding 15-2 record in 1946-1947.

Besides athletics, Tom was also involved in other activities such as being senior class President and a member of the National Honor Society. Tom graduated with an A average and was a J-Club Member and was on the yearbook staff. Tom had an excellent work-ethic and caddied at Moonbrook Country Club in Jamestown NY to earn money for college. After high school, Tom received a full football scholarship to Western Reserve University in Cleveland, Ohio, a full charter member of the Mid-America Conference. Tom was also pursued by other coaches including Woody Hayes who at that time was Head Coach at Miami University, but chose Western Reserve because he wanted to pursue a career in Dentistry.

His first game on the collegiate level was as a sophomore starter at left half-back against West Virginia University at Mountaineer Stadium, where Western Reserve lost 33-17. He had several key runs and receptions in his debut en route to being the second leading rusher for Western Reserve that season. That year he also performed against Cincinnati, Miami of Ohio, Western Michigan and Toledo. Tom also competed in Track his sophomore year.

During his junior season he was accepted into dental school but because of his excellent grades was allowed to play football. He started every game but wound up with his career with three letters, eighteen touchdowns and was among the school's top rushers.

Off the field, Tom was president of his junior class and his fraternity, Phi Gama Delta and graduated dental school in 1956 with his Doctor of Dental Surgery. He was a Lieutenant in the Dental corps of the United States Navy from 1956-1958 and was commander of the WAVE Clinic.

Later in 1958, he returned to Cleveland for post-graduate work in orthodontics and in 1963 began an orthodontic practice in Ashtabula and Mentor, Ohio. Tom was on the Board of Overseers at Western Reserve for six years and on the Alumni Board of the Western Reserve Dental School for eight years.

He was president of the Dental School Alumni for two years, past president of the North- Eastern Ohio Dental Society and president of the Ashtabula Country Club for three years. Additionally, he was a professional ski instructor at Holiday Valley for eighteen years and retired from the Naval Reserve as Commander in 1990.

Tom and Louise Morrison met during his last year of college and were united in marriage on July 7, 1956 and had recently celebrated their sixty-first wedding anniversary. Their marriage was one of mutual respect, admiration and love for each other. The memories that were created are cherished treasures of the heart.

In 1959 the Raffa Family moved to Ashtabula to begin his practice, later expanding it to include Mentor, Madison, Jefferson and Painesville and Perry. Tom practiced orthodontics for fifty-eight years prior to his retirement.

Tom was an excellent skier and golfer. Tom was runner-up in the club championship and awarded the member-guest trophy for several years at Ashtabula and Madison Country Clubs. His love of golf led him to several other Country Clubs; Tanglewood, Canterbury, Quail Creek in Naples, Florida and most recently was an active member of Kirtland Country Club.

Tom was preceded in death by his parents.

Funeral Services will be held at 11:00 am on Wednesday, October 11, 2017 at First Presbyterian Church, 4317 Park Avenue, Ashtabula. The Reverend Glen Warner, Pastor Emeritus will officiate. Burial will be in Ridgeview Cemetery.

Calling hours will be observed from 4-7 PM on Tuesday, October 10, 2017 at the Zaback-Williams-Ducro Funeral Home, 500 West Prospect Road, Ashtabula, Ohio.