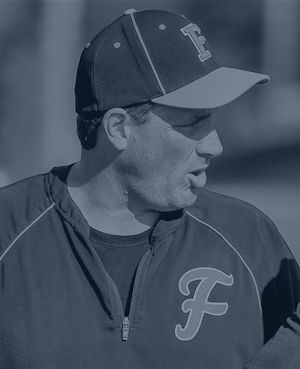 EDITOR'S NOTE: The following article by Braden Carmen originally appeared in the Observer on May 14, 2018.

The Fredonia Hillbillies baseball program has been one of the most dominant sports programs in Western New York for many years. With two state championships since the turn of the century, along with a record seven straight Class B1 championships - with a good shot at an eighth this year - the Hillbillies are the top of the class in high school athletics in the southern tier.

The man at the helm of the Fredonia program is Vince Gullo.

In his 17th season as Hillbillies head coach, Gullo has transformed the Fredonia Hillbillies into a force to be reckoned with in Class B1. The team has been so successful in recent years, in fact, Gullo does not even set milestones for the regular season before it begins. All he is focused on is a postseason run.

"Our goal is the same as it is every year - to play in June," said Gullo before the season began. It certainly looks as if Fredonia has a good chance at that once again this season.

reached a milestone last week that few coaches will ever reach - 300 wins with one team - with a win over Silver Creek last Tuesday. Though only two other active coaches in the southern tier have reached the mark of 300 wins, Gullo did not make a big deal about the milestone. The heralded coach did not even mention the achievement to anyone until the game was over when he addressed his team. Instead, he chose to highlight the accomplishment of one of his players - senior pitcher Derrick Walters - who finished off a no-hitter in the contest.

Once he finally did acknowledge his own achievement, Gullo's way of mentioning the benchmark caught his players' attention.

"He's a very selfless guy, because at the end of the game when he mentioned it, he said ‘This was OUR 300th win'," said Fredonia senior co-captain Seth Schrader. "That sort of embodies who he is as a coach and as a person. He's never going to claim credit."

Gullo's demeanor in regards to his program's success should not be confused with a lack of importance he puts on winning. In fact, it's quite the contrary. Gullo's office is full of newspaper clips, photos and team programs highlighting the moments of his coaching career at Fredonia. Off the top of his head, Gullo knows the statistical highlights of his program during his tenure, from his seven straight class titles, to the state championship teams he led in 2006 and 2013, to the head-to-head record of his team against rival Dunkirk over his tenure.

Last week, a day after winning his 300th game, Fredonia traveled to play at Dunkirk on Wednesday. Before the game of the two longtime rivals, Dunkirk coach Frank Jagoda led a tribute to Gullo in acknowledgment of his 300th win. The two teams both stood along the baselines as Jagoda addressed the crowd - a crowd that included Gullo's parents sitting right behind home plate. The tribute arose a smile out of Gullo, as the two longtime rivals and friends embraced at home plate before the final regular season meeting between the two teams, an eventual 10-5 Fredonia win.

"Vinny is a humble guy. He's also an intense individual, as well. We've had our battles throughout our time. (Gullo) told me we were 18-18 going into (Wednesday)," said Jagoda. "Vinny has been raised in good stock with his family and his parents. It's truly a tribute to his dedication to the game and to the kids that he coaches. He's an outstanding coach. He gets a lot out of his kids all the time, and I think he gets a lot out of them because he expects a lot out of them. They believe in him and you can see it in how they play. They believe in what he is saying."

There is no better example of that statement than Schrader, who hit his first varsity home run on the day of Gullo's 300th win. Just as Gullo did with his big moment, Schrader downplayed his own moment of glory to highlight the achievements of Gullo, Walters and the team as a whole.

"(Coach Gullo) works really hard, and he deserves this," said Schrader. "He puts a lot into this. More than I think anybody knows."

Other coaches notice the work Gullo puts in, as well.

"He's obviously a very talented coach who has had a lot of great teams over the years," said Silver Creek coach Mike Janisch. In a similar mindset to Gullo's about the benchmark, Janisch added, "If you look at it as your victories as the coach, you're missing the point. Whatever the coach's number is, it's about the kids success."

One who has been both a player and a coach along the way in Gullo's journey is Bryan Bongiovanni. A star player on Gullo's 2006 New York State Championship team at Fredonia, Bongiovanni is now the head coach of Chautauqua Lake, Fredonia's division foe, who provided the toughest test along the way to the Hillbillies' perfect season in league play this year.

"300 wins is a milestone for any coach. In order to accomplish it as fast as Coach Gullo has speaks volumes to the caliber of coach he is," said Bongiovanni. "To have that kind of consistent success is unprecedented. … He has created a dynasty that everyone wants to be a part of or emulate."

Bongiovanni was an assistant coach under Gullo before taking over Chautauqua Lake. The former Fredonia star believes that Gullo should now finally receive the credit he deserves.

"A lot of talented players and coaches have come through Fredonia, but the constant throughout all of these years has been Coach Gullo. He is always redirecting praise aimed towards him onto others. This time it's his turn to be in the spotlight."

When it's all said and done, there will surely be many more wins and trophies attached to the name of Vince Gullo. With no signs of slowing down anytime soon, just how many more accolades Fredonia will earn under Gullo remains to be seen. But one thing is for sure - Gullo's impact on Fredonia will be remembered long after his days in the dugout are over. 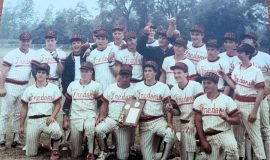 1985 Fredonia Hillbillies baseball team. Section 6 Champions and Far West Regional Champions. Pete Criscione is far left back row. Vince Gullo is the player on the right side of the plaque - captain. 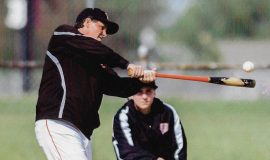