WESTFIELD - Vincent R. Calarco, 92, of Westfield, died Thursday, April 14, 2016, at the VA Medical Center in Erie, Pa., with his family by his side following an extended illness.

A Westfield resident all his life, Vincent was a 1941 graduate of Westfield Academy, where he ex-celled in sports. He grew up loving sports and spent much of his youth at the YMCA. In high school he excelled in four varsity sports - football, basket-ball, baseball and track. In fact, he was so good, he earned 15 out of 16 total letters, the most any student could receive and picked up a large collection of all-conference awards and medals in tournaments along the way. He was inducted to the Chautauqua Sports Hall of Fame in 2014. 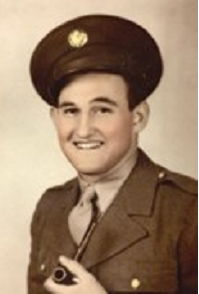 He was drafted into the U.S. Army in 1943 and was a member of the 89th Division, 3rd Army and the 550th AAA infantry during World War II, serving under General George S. Patton, spending much of his time in combat through- out the European Theater. While in England waiting to come home, Calarco was in charge of intramural sports. Vincent hosted the 550th Infantry reunions for many years in Westfield.

Vincent's life wasn't all school, sports and the mili-tary. He was the son of two hard-working restaurant owners and Vincent had to help in the family business.

His family operated Calarco's Restaurant in Westfield, where he began working at the age of 13 and once home from the War, he returned to the res-taurant where he and his wife and children carry on the tradition of serving terrific food and great Italian dishes.

Vincent formed the Calarco Trojans semi-pro basketball team, which began playing area teams in the Merchant League and eventually the Chautauqua County Basketball Association for more than seven years. He also formed base-ball and football teams, which continued for 24 years and played football with the Jamestown team in 1948-49. He owned a team and played Baseball for the NY-PENN League in the 1950s.

At that point, Calarco took on a whole new role as a basketball referee and for the next 50 years, traveled throughout the area officiating hundreds of games. He was honored on April 30, 2006, by the International Association of Approved Basketball Officials for his 50 years of service.

He was a communicant of St. Dominic Roman Catholic Church of West-field and a member of the Fr. Daniel Early Council 3100 Knights of Columbus.

He was also a charter member of the Chautauqua County Investment Club and a founding father of the Crossroads Market in West-field. Vincent was so proud of his community of West-field and was always looking for ways to promote and improve Westfield.

He was instrumental in the construction and implementation of the Westfield information booth at the Daniel Reid Pier.

He was life member and past commander of the John W. Rogers Post 327 American Legion of West-field and a member of the Mayville Veterans of Foreign Wars Post 8647, where he was a member of the Cribbage Club. He was also a member of the Loyal Order of Moose 118 of Westfield.

He was preceded in death by his son, Timothy Calar-co, who died on April 12, 2010; two sisters: Theresa Russo and Grace Trippy; as well as two brothers: Carl and Anthony Calarco.

Burial will be in St. James Cemetery.