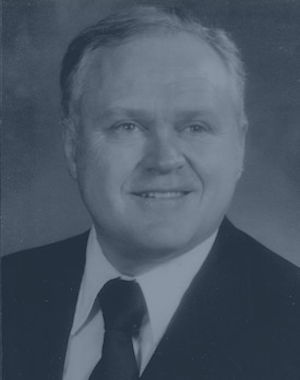 EDITOR'S NOTE: The following article originally appeared in the June 15, 2014 edition of the Observer.

Chuck Johnston has always been a man of few words.

But when the subject of tennis comes up, he is more than willing to share his thoughts about the sport.

And one thing hasn't changed: When he speaks, it's with meaning and you listen.

In 1962, Johnston became the first-ever boys tennis coach at Fredonia. He held the position for 27 years, and boasts an impressive 374-47 record. During his time as coach, he recorded 17 County championships, 13 Section 6 titles, was named New York State Coach of the Year in 1982 and the District 1 Coach of the Year from the National High School Coaches Association in 1983. He also held a perfect 54-0 record against Dunkirk.

"We played the toughest teams around," Johnston said. "I took teams to Erie and Buffalo a lot - also Orchard Park, Erie, Erie East, Millcreek and Erie Tech. We played good teams. We had good athletes. I didn't get the leftovers. I got the kids from basketball teams and football teams."

The thrill of tennis in Johnston's eyes is, "Mainly, it's a sport if you mess up, it's your fault," he said. "You don't have to rely on somebody else."

THE FATHER OF TENNIS IN FREDONIA

In 1962, a few parents approached the Fredonia Board of Education, requesting the formation of a tennis team. Johnston had previous tennis experience, and was handed the job.

"I started the tennis team because I played some tennis," Johnston said. "I also coached football for a while. The first few years in Fredonia, I had the jayvee football team that was undefeated all three years."

To form his new team, he "recruited" athletes from other sports. One of those players on the team was Joe Calarco, who is now the Fredonia State women's tennis coach.

"I had played football and basketball, but had never played tennis, but found myself as part of this first team," Calarco recalled. "I played my junior and senior years. He was an imposing figure with a solid build - more like a middle linebacker, than a tennis player. As a youth, I was a bit more timid. When he spoke, I not only heard his words, I felt them. Later, as I grew to know him better, I saw the gentle, friendly side to him - the one with the big grin."

And though it has been 44 years, Johnston still remembers his first team - and any team - like it was yesterday.

"I had a ready-made team when I started," he said. "There was a doctor in Dunkirk named Wendell. His son (John Wendell) was on the team. A college professor - Al Loomis - who played tennis for Northwestern, his son (Jack Loomis) was on the team. Third singles was an all-around good athlete from basketball and football named John Keyser. His father was on the faculty at Fredonia State. The doubles teams were the only ones that I had to coach. I had picked up doubles. I lived in Florida before I came up here and I played a lot of tennis with older guys. I learned how to play doubles pretty good."

The first doubles team of that 1962 team consisted of Calarco and Tom Albertine. The duo had never played tennis, but went on to have a perfect season and lost just one match in their second year.

"Chuck loved doubles," Calarco said. "He and another adult would team up against Tom and I. We played against two adult men, which you can't do today."

The second singles team was Richard Albertine and Tom Gauronski.

In the side yard of Johnston's Brocton home is a tennis court his children grew up playing on. While Mr. Johnston was coaching Fredonia, his son Steve, who went on to play at Fredonia State, played for the Brocton team.

"He was my son, I was rooting against him," Mr. Johnston said, without cracking a smile.

"I wasn't hoping he would win either," Steve shot back.

When asked why Mr. Johnston didn't coach his son in high school, he responded, "I found the players with their parents being one of the coaches, they were not ridiculed, but they had problems, so I wanted our kids to go to school some place where I didn't teach."

The tennis court in the side yard is where Mr. Johnston learned to play doubles as he had a group of men come play three times a week. Mr. Johnston was one of the younger players at the time and said it helped him learn how to play doubles really quickly and that was why he was comfortable coaching doubles.

Along with Steve and Janice, Chuck and his wife, Kay, raised three other children in Mike Johnston, Brian Johnston and Julie (Johnston) Morrison.

"I didn't push them anywhere," Mr. Johnston said when asked if he forced the kids to play tennis. "They wanted to play, especially since we had the court down there."

"It seems like we fell into it," Steve said. "It's never like we were expected to play, but we wanted to. He really did stay out of it and I think that he did that purposefully to keep our love of the game. If he came in too much, we might have felt he was interfering."

AN ADDITION TO THE JOHNSTON FAMILY

Once Steve finished his science degree at Fredonia State, he returned to Brocton to teach earth science. In 1986, he decided to do an exchange year in Australia. There, he met his future wife, Lisa Johnston.

Lisa played tennis at a very high level in her younger years in Australia. She was on elite State teams and her teammates included Mark Woodforde. Woodforde and his teammate Todd Woodbridge are considered the best doubles team of all time, having won at least four Wimbledons, four U.S. Opens and other Grand Slam tournaments. Lisa also played with Darren Cahill, who made the final of the U.S. Open and is one of the top tennis commentators for all of the Grand Slams. Cahill later went on to be Andre Agassi's tennis coach.

Lisa was ranked in the top 10 in Australia as a Junior and received a full scholarship to play Division 1 tennis at Youngstown State.

When Lisa and Steve met, she had one key question for him.

"The first date I asked if he played tennis," she recalled. "He said, 'Yes.' I said, 'Get your racket.' We played and haven't played since because he didn't like the way I called the lines.

"I didn't want to make it in tennis," Lisa continued about why she did not pursue tennis professionally. "You had to practice six hours a day. I love to play, but I don't like to practice. I just want to play. I don't have the drive for practice. Once I moved here I had children. That became my focus."

When Steve and Lisa tied the knot, it didn't matter to Mr. Johnston that his son had found someone with an impressive tennis resume.

"I was just happy he was getting married," he quipped.

A NEW JOHNSTON TAKES OVER THE HELM OF FREDONIA TENNIS

Lisa is now in her ninth year as the Fredonia boy's tennis coach and it doesn't take much to remind her whose footsteps she is walking behind.

In the main hallway of Fredonia High School is a Wall of Fame, where Mr. Johnston's photo hangs with his impressive resume.

"I knew his record as soon as I got the job," Lisa said. "I felt really happy. I knew his record. Every day I walk into the school and walk past the Wall of Fame and read it many times. There is a great sense of pride. I was a little nervous that I might not have success. It feels good the Johnston name is synonymous with tennis."

At the age of 84, Mr. Johnston doesn't leave the house much these days. But when he does, it's to watch his grandchildren play. Steve and Lisa have four children - Marcus, Katrina, Jessica and Nick - all of which have played tennis for Fredonia High School.

"He doesn't get out of the house much, but he won't miss a tennis match," Steve said. "It will be 40 degrees with 20 MPH winds and he will set up his lawn chair and watch the game. He doesn't miss a match. He didn't miss a girls college match. He went to all the college matches."

And as Nick Johnston graduates, his cousin, Alex Brown, carries the torch, so to speak, as he will be entering his junior year in the fall, and also plays tennis.

"I enjoy watching them," Chuck said, before joking, "I can't coach because (Lisa) won't let me."

A FORMER PLAYER OF CHUCK COACHES HIS GRANDDAUGHTERS

When Jessica and Katrina began playing tennis together at Fredonia State, their coach was Calarco, who as previously mentioned, was on Chuck's first-ever high school team.

"He was one of the doubles players I helped develop," Chuck noted.

"I wouldn't be here (as a coach) if it had not been for him," Calarco said. "What a professional and personal thrill to have him at the matches. We talked about how the game has changed. It is faster and stronger, but it remains the same - you still have to get the ball over the net. I used to ask him for advice in coaching, and he would tell me to tell my players to hit their strengths to their opponent's weakness. Of course, this is easier said than done.

"I am not as well versed in the sport as he was," Calarco admitted. "I use skills and drills, but he did it as a "natural" player/coach. I do try to foster a relationship with my players and foster a sense of team as he did. Most importantly, he demonstrated his love for the game and his concern for his players, which I try to emulate on and off the courts."

Another way Calarco emulates Mr. Johnston is by remembering a simple phrase he always said before breaking out with a grin: "You learn how to play tennis, by playing tennis."

"Tennis and Chuck changed my life," Calarco said. "(Fredonia State athletic director) Greg Prechtl called me in 2000 and said, 'Joe, our tennis coach is not returning. I have a team and no coach. Will you help me for six weeks?' Now I have been there 14 years. (Chuck) introduced me to tennis and it has offered me so many opportunities in life."

As Steve, Brian, Janice Mike and Julie celebrate Father's Day today, they think of a man who was a legendary coach, but also a legendary dad.

"My dad always led by example," Steve said. "He didn't lead verbally. Myself, and brothers and sisters modeled after him. He had a great competitive nature in coaching and playing, and it has filtered down into us. When he spoke, it meant something and you listened.

"My dad will still call me up at 11 a.m. or 10 p.m., and tell me to watch this match on television," Steve concluded. "His love of the game has never waned."

Neither has the love his children and grandchildren have for Chuck Johnston. 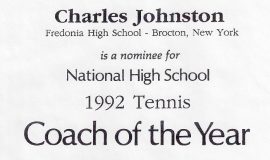 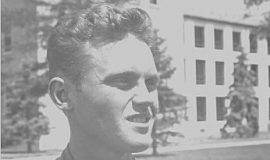 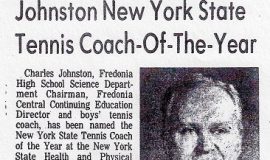 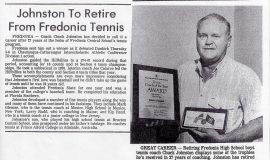 Johnston To Retire From Fredonia Tennis. 1985. 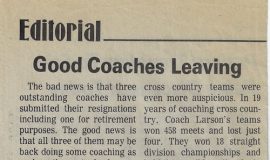 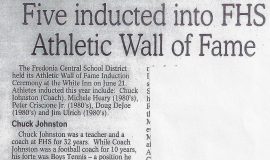 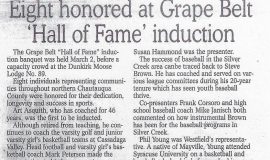