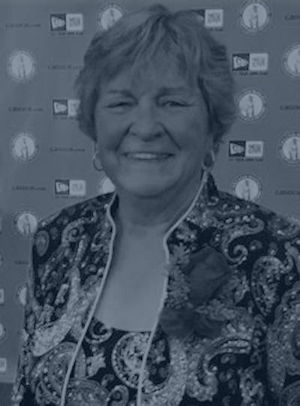 Cindy Wyatt
b. 1944
Category
Weightlifting
Year Inducted
1994
Cindy Wyatt may very well be one of the strongest two-sport athletes in the history of Western New York.

Cindy Wyatt was born in Buffalo on March 31, 1944 and graduated from Williamsville High School. She was one of the first women in the United States to receive an athletic scholarship when she accepted the offer from the University of Hawaii to become a member of one of the best track and field teams in the college ranks in 1961.

Cindy's early career focused on track and field where she excelled at both the shot put and discus. As a teenager, she was a member of six All-America track & field teams (1958-59, 1961-63), and set four national age group records in shot put.

Her career extended beyond the collegiate level. She represented the United States at the 1963 Pan-American Games where she won a silver medal in shot and placed sixth in discus. She competed on six U.S. teams against the Soviet Union in the 1960's, placed fourth in the 1960 Olympic trials, and she qualified for the 1964 U.S. Olympic team in shot put where she placed third at trials.

After graduating from Hawaii, she furthered her education at Ohio State University with a master's degree in counseling psychology in 1969. She still kept her winning ways for the United States track team and once again was on the United States international squad.

She was selected for several international track teams which journeyed all over Europe and competed in such places as Russia, East Germany, West Germany, Poland, England and Brazil.

In 1969 Cindy decided to turn her talents to women's powerlifting and what a success she was. She won the Women's National Powerlifting Championships from 1976-79 while establishing over 20 world records, including 225 pounds for bench press, 385 for squat, 385 pounds for dead lift and the world record total of 985 pounds.

Cindy also was a leader in development of women's powerlifting in the United States and in 1978 was appointed as the first women's national chairman. Two years earlier she received another first by becoming the first woman to receive an International Referee Certification in Arlington, Texas.

Cindy later turned back to track and field, and began competing in the master's division, where she won the shot and discus in the 2011 nationals in the 65 - 69 year old group.

Cindy was inducted into the inaugural class of the Niagara Track & Field Hall of Fame (1998) and in her honor, the Hall of Fame created the Cynthia J. Wyatt Award, which is presented annually to the outstanding female High School Athlete of the Year. Cindy is also an inductee of the USA Women's Powerlifting Federation Hall of Fame (2010) and the Greater Buffalo Sports Hall of Fame (2016).

Cindy was formerly married to CSHOF inductee Don Reinhoudt (Class of 1983) who earned the title of the World's Strongest Man in 1979. It was claimed by proud Chautauqua County residents that the Reinhoudt household in Brocton, NY was the home of the strongest married couple on planet Earth. 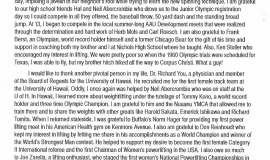 Cindy Wyatt's response to being inducted into the Greater Buffalo Sports Hall of Fame, 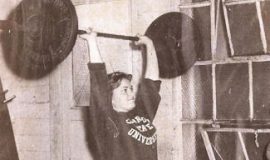 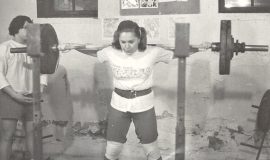