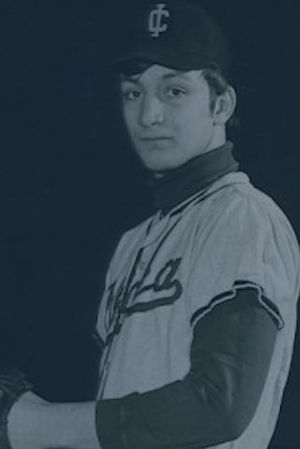 Craig Paterniti
1951–1998
Category
Baseball
Year Inducted
2002
Falconer has had its share of outstanding athletes through the years, but the best might have been Craig Paterniti. Paterniti was so outstanding in football, basketball and baseball that in all likelihood he is the only player in Chautauqua County history to make All-Western New York in all three in the same year. That hat trick has been performed very few times by any WNY athlete.

Paterniti was born on November 11, 1951, and began showing the athlete he was to become as an outstanding pitcher and shortstop for the Falconer Little League from 1961-1965. He had several mound battles with Dunkirk's Dave Criscione, who went on to play for the Baltimore Orioles.

Paterniti started playing junior high basketball in the seventh and eight grade followed by a year on the Falconer junior varsity before being elevated to the varsity for a very distinguished three-year career. He was All-Western New York choice as a senior when he averaged more than 23 points per game with five games over 30 points and a then school record 35 points en route to a record 1,022 career points.

Paterniti was chosen to the Chautauqua-Cattaraugus Interscholastic Athletic Conference First Team as a senior after being named to the Second Team both as a sophomore and a junior. When he was a sophomore, Paterniti was on the first Falconer team that made the Section 6 championship at Buffalo's Memorial Auditorium in 17 years. He tallied 18 points and was the Golden Falcons' top scorer in a six-point loss to Salamanca.

After spending a year on the junior varsity in 1966, Paterniti spent the next three seasons as the cornerback and quarterback for the football team of coach Bill Race, who is also a Chautauqua Sports Hall of Fame inductee.

He was named All-Western New York First Team defensive back as a senior in 1969 and holds the school career interception record. Additionally, he was a CCIAC all-star two straight years after being honorable mention as a sophomore.

Paterniti was a four-year starter in baseball (1967-1970) for the Golden Falcons and was named All-Western new York in his senior campaign for coach Dennis Meszaros. He was a tremendous pitcher and during his career hurled three no-hitters en route to being selected CCIAC First Team from 1968-1970. His talents allowed him to be drafted by the Cleveland Indians, but he instead went to Ithaca College where he continued to excel in baseball. Paterniti, along with Kevin Martin, who was drafted by Detroit, are the only players from Falconer ever drafted.

During his freshman season (1970-1971) at Ithaca, Paterniti participated in junior varsity basketball and was the second-leading scorer with a 16-point average. Due to his baseball scholarship, he didn't play varsity basketball. From 1971-1974, Paterniti accomplished a great deal in his baseball career as a pitcher and was the only freshman on the team. His junior season was very memorable as he guided Ithaca to a runner-up finish in the College World Series in its bracket.

He compiled a team-leading 9-3 record while having a 2.38 earned run average with 54 strikeouts in 87 1/3 innings. His 3-2 win over Eastern Illinois allowed the Bombers to advance to the championship where they lost to University of California at Irvine. Paterniti was an ICAC First Team all-star in 1972 and a Northeast Regional All-Tournament selection in 1974.

As of 1999, Paterniti was still the all-time strikeout leader at Ithaca and is among the Top 5 in victories, earned run average, career innings pitched and innings hurled in a season. During and after his collegiate career, Paterniti competed in recreational league basketball and softball. Knee surgery ended his basketball playing days, but he still played softball until 1984.

Paterniti was a certified baseball umpire on both the high school and college levels and did several Ithaca and Cornell games. Back in 1983, he became a certified basketball official in the Ithaca area and officiated in nine sectional finals plus a high school state public school final and a parochial state championship.

He coached girls softball in the summer leagues from 1983-1990 and was well-respected by his fellow officials, coaches and players when he passed away at the young age of 46 on June 19, 1998. In 1999, Immaculate Conception Parochial School honored him by naming its gymnasium after him. He was employed 20 years as a physical education teacher at the school. 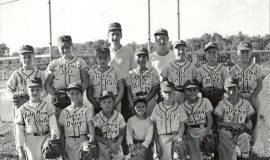 Craig Paterniti is in bottom row - far right. Circa 1960. 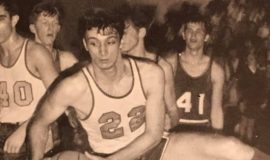 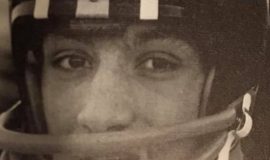 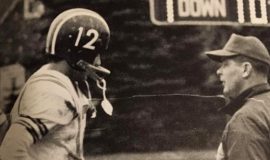 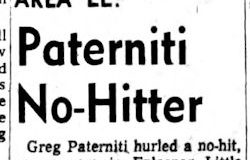 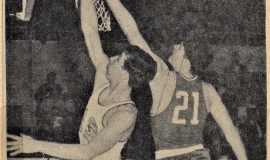