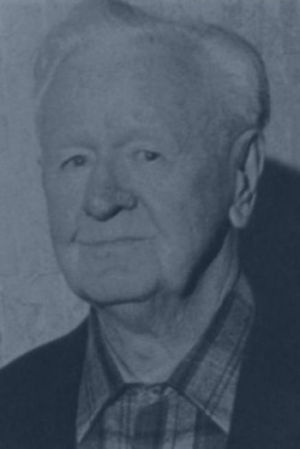 Harry Martenson
1904–2003
Category
Baseball
Year Inducted
1987
Harry Martenson lived in Jamestown all of his entire life and was active in baseball most of those years.

Martenson first became involved in sandlot baseball and played for a team called the Triangles in 1929. He was an outstanding pitcher and took his talent to the Jamestown Chair team which was managed by Joe Nagle, who is a Chautauqua Sports Hall of Fame inductee.

In 1941 Martenson bought a restaurant, Harry's Lunch, on Forest Avenue and baseball was always the topic of conversation there. In 1964 Martenson and some other players formed a team to play the Warren Oldtimers which led to the formation of the Jamestown and Area Oldtimers team. It was formed by Martenson, Nagle and Morrie Mistretta, another 1987 CSHOF inductee. The Oldtimers' organization continued to grow and now plays a full schedule, each summer including road games in Ohio and Pennsylvania. Martenson was named the organization's secretary-treasurer in 1964 and held the position for many years.

The main function of the Jamestown and Area Oldtimers is not to play baseball, but to support youth baseball. Every year the Oldtimers raise money to provide equipment and trophies to youth leagues in the area. Martenson has been very active in the fund raising and usually uses his home as a distribution point for the equipment. A trust fund was established by the Oldtimers and all the interest from it used to purchase equipment for youth leagues.

Martenson remained one of the most active members of the Oldtimers and when he was not handling his duties as secretary-treasurer, he kept the media informed of the organization's upcoming events. 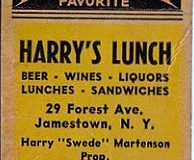 A matchbook cover from the restaurant Harry Martenson operated from 1941 to 1968. 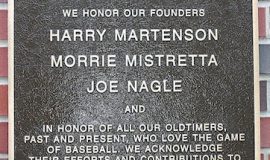 Jamestown And Area Oldtimers Baseball. This plaque is installed at Diethrick Park. 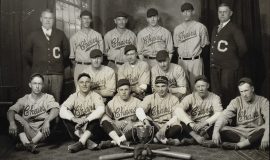 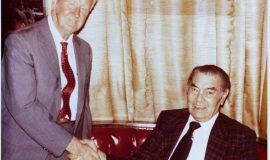 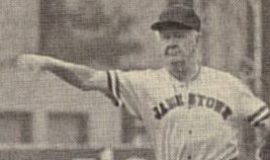 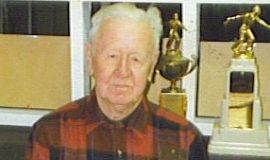 Harry Martenson volunteered many hours at the CSHOF.