The Post-Journal
by Randy Anderson
December 27, 2019 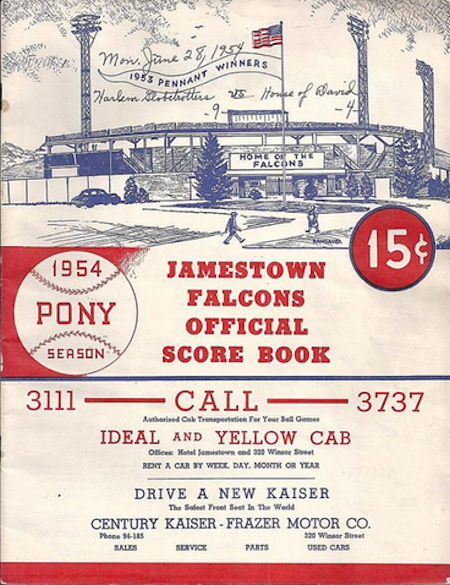 The 1954 season saw the return of popular John O’Neil to the Jamestown Falcons. O’Neil had been with the Falcons back in 1941 before starting on his baseball odyssey that took him to the Major Leagues and then back down. In his final year as a professional ballplayer, the 34-year-old hit .298 for the Jamestown team.

Following the departure of Dan Carnevale to Wilkes-Barre of the Eastern League, the Detroit Tigers brought in Danny Litwhiler to manage and play for their Class D club in Jamestown. Although Litwhiler, a Major League veteran of 11 years, was batting .345, his team was in seventh place when the Tigers fired him. He was replaced by Wayne Blackburn, another player-manager.

Blackburn was able to turn things around, and, helped by his own .324 average, steered the Falcons to a second-place finish in the regular season before Corning eliminated them from the playoffs. More importantly to the Detroit Tigers was the financial status of their minor league team. After bleeding $60,000 in red ink in 1953, new general manager Hillman Lyons boosted attendance from 49,000 to 86,000 patrons. The Tigers rewarded Lyons by promoting him to the Buffalo Bisons for 1955 where he was joined by former Falcons field manager Carnevale.

One of the top players for Jamestown was a Detroit-born pitcher who was back for his second year with Jamestown. Following a 9-2 record in 1953, Al Taylor, pictured below, recorded an 11-7 record in 1954. After one more season in the minors, Taylor, like so many other ballplayers of that era, decided to make the Pearl City his home. Al became a well-known area umpire and was inducted into the Chautauqua County Umpire’s Hall of Fame.