The Post-Journal
by Randy Anderson
February 11, 2020 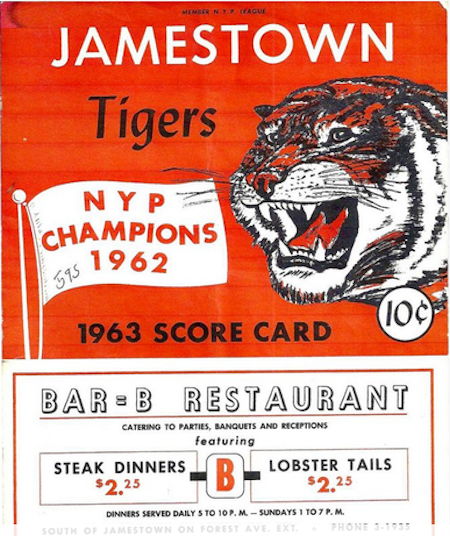 A familiar name was in charge of the front office of the Jamestown Furniture City Baseball Club in 1963. Popular John O’Neil, former shortstop on the Falcons teams of 1941 and 1954, was hired as the general manager of the Jamestown Tigers.

Stubby Overmire returned for his second season as field manager, but his stay was brief. In the middle of June, he was called up to the Detroit Tigers as a coach. He was replaced by interims O’Neil and Max Macon before Fred Hatfield was handed the job.

The Baby Tigers finished fourth in the six-team New York-Penn League, but got hot during the playoffs. They eventually lost a winner-take-all final game to Batavia. O’Neil had a difficult job enticing fans to College Stadium. Just over 31,000 attended games in 1963, less than half of the previous season.

One bright spot for the team was the play of the smallest player on the squad, Mike Holodick, a scrappy 5-foot-6 second baseman who hit .327 to capture the league’s batting title. A trio of pitchers, all of whom would have significant careers in Major League Baseball, called Jamestown home that season: Pat Dobson, John Hiller and Jack DiLauro. Dobson and Hiller tasted World Series champagne with the 1968 Detroit Tigers while DiLauro won a ring in 1969 with the New York Mets.