The Post-Journal
by Randy Anderson
February 21, 2020 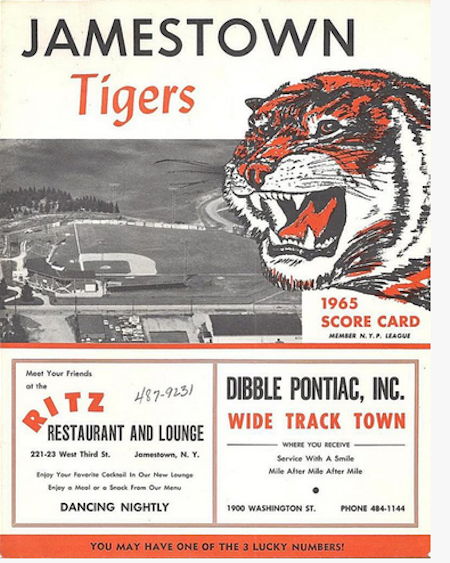 In the history of Jamestown baseball, 1965 was a very interesting year. Quick-quipping Jamestown businessman Marty Haines was named general manager of the Jamestown Tigers. Optimism was high as Detroit Tigers farm director Don Lund boldly predicted in The Post-Journal that their Class D club would win the NY-P League.

Unfortunately for Haines and the investors in Jamestown Furniture City Baseball, Lund’s crystal ball was a bit fuzzy. The Baby Tigers finished in a tie for last in the loop with a 47-75 record. “We are shocked that the team fared so badly,” stated a Detroit executive. “We are shocked that you are shocked,” retorted Haines.

One player of note on manager Gail Henley’s squad was a 20-year-old catcher from Perrysburg, Ohio who batted an anemic .237. Although Jim Leyland never advanced to the major leagues as a player, he became well-known as the manager of the Pittsburgh Pirates, Colorado Rockies, Florida Marlins and Detroit Tigers. A three-time manager of the year, Leyland was skipper of the 1997 World Series champions Marlins.

Haines’ job of promoting local baseball had been made more difficult by the poor on-field performance of the team. He wanted no excuses from Detroit and loudly made his feelings known. Detroit assistant farm director Ralph Snyder answered the criticism by stating, “If there is so much ill feeling over the 1965 season that Detroit could further the cause of baseball here by pulling out, then perhaps that would be the best move.” And so it was.