The Post-Journal
by Randy Anderson
February 29, 2020 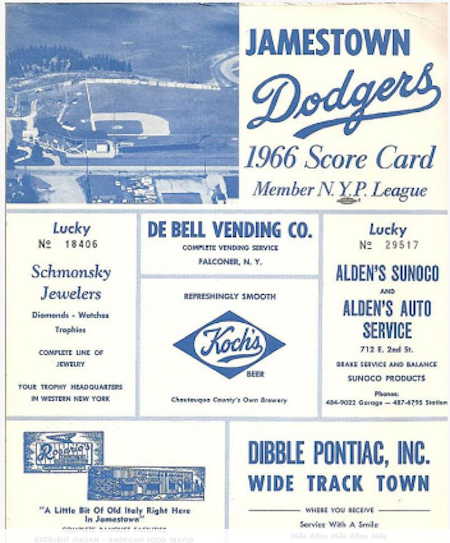 Shortly after Detroit pulled out of Jamestown following the conclusion of the 1965 season, the recently crowned World Series champion Los Angeles Dodgers contacted New York-Penn League President Vince McNamara expressing an interest in fielding a team in the league. McNamara put the Dodgers in contact with Marty Haines, below, and Russ Diethrick of Jamestown Furniture City Baseball who successfully negotiated a working agreement between the parties.

The renamed Jamestown Dodgers were managed by Bill Berrier who Frank Hyde of The Post-Journal described as “a hard-nosed character to whom curfew is a sacred as an Easter sunrise.” The Los Angeles Dodgers sent their No. 1 draft choice to Jamestown as a show of their commitment, but James Roberts had limited success and a year later his career was over.

The star of the team was outfielder Dave McCammon who won the league’s batting championship over Cito Gaston of Batavia by getting a hit in his final at-bat of the season. McCammon’s .335 edged Gaston’s .333.

In 1966, the NY-P league used a split season whereby the champions of each half would meet in the playoffs. Berrier’s boys finished fourth in the first half-season and improved to second place on the latter half, but did not qualify for the postseason. The club was the league’s leader in hitting and fielding, but pitching let them down.

The notoriously fickle Jamestown fans did not support the team as expected. Attendance of just 30,000 left the parent Dodgers with a $4,000 loss. Los Angeles vice president Fresco Thompson remarked, “You have everything a baseball team could wish for except fans, and that is a mystery to me.” The Dodgers decided to move on from Jamestown, so Diethrick got on the phone again.