The Post-Journal
by Randy Anderson
September 27, 2019 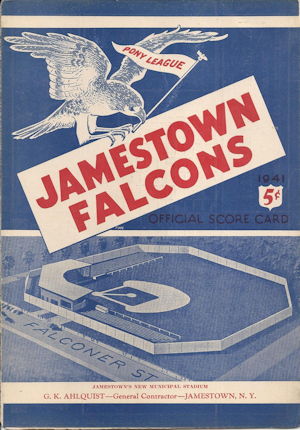 Ernest Kessler, former Jamestown councilman, was chairman of the citizens committee that raised funds for the construction of the new stadium for the Jamestown Falcons. Judge Allan Bargar was also instrumental in soliciting funds for the group that purchased a 20 acre tract of land on Falconer Street. Construction commenced in the fall of 1940 and was completed in time for the May home opener of the 1941 season. Municipal Stadium, which seats 4,200, was built for a cost $60,000.

Voted by fans as the Most Popular Falcon was shortstop John O’Neil from Shelbiana, KY. Known as “Tip” or “Scooter,” O’Neil made it to the big leagues with the Philadelphia Philles in 1946. He was involved in baseball for 45 years as a player, manager, general manager and scout.

Besides his year as a Jamestown player in 1941, he also played for the 1954 Falcons and was the general manager of the 1964 Jamestown squad. O’Neil, who married a Jamestown girl and made the city his home, was inducted into the Chautauqua Sports Hall of Fame in 2012.