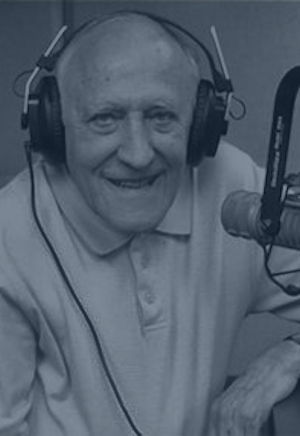 EDITOR'S NOTE: The following story originally appeared in The Post-Journal on January 30, 2013.

WJTN's Jim Roselle may not have attended the University of Notre Dame, but one would be hard-pressed to find a bigger fan of the Fighting Irish.

In recognition of his loyalty to and support of the University of Notre Dame, Roselle was presented with a certificate of appreciation.

Roselle, who joined WJTN in 1953, was awarded with the certificate of appreciation by the Notre Dame Alumni Association. The certificate, signed by Dolly Duffy, executive director of the alumni association, also included a Notre Dame pin.

"It's a great surprise," said Roselle.

The award was presented to Roselle on-air by Anthony Barone, 1956 Notre Dame graduate and Lakewood historian. Roselle credits Barone for introducing him to the Notre Dame experience.

"One day Tony said to me, 'Would you like to go to a game?'" said Roselle. "So, along with some other wonderful people such as Joe Rizzo and Jim McElrath, we all went to a weekend at Notre Dame - my first introduction to it. It's an unforgettable experience, to be not only at Notre Dame, but to be with these particular guys because we just had a ball."

According to Barone, being awarded with the certificate couldn't have happened to a nicer man.

"Jim has been a dedicated Notre Dame fan and has always plugged our university numerous times on his weekly radio program," said Barone. "Doing so, he has prompted many local students to look to Notre Dame in their future. With this unending dedication, he has earned a certificate of appreciation from the Notre Dame Alumni Association. Now in his 80s, he is still going strong at WJTN, 9 a.m. to noon weekly. Jamestown is lucky to have this active son."

Some of the plugs that Barone refers to include interviews that Roselle held while attending Notre Dame games, which he played on-air during his program entitled "The Times of Your Life." Some of the interviews Roselle conducted are with the Rev. John Jenkins, current Notre Dame president, former executive vice president Fr. Bill Beauchamp, Notre Dame football great Justin Tuck, senior associate athletics director John Heisler, various leprechaun mascots, alumni and bookstore managers.

"I got involved by listening to broadcasts," said Roselle. "But, mainly it stems from the Knute Rockne story, which still is a great story. It was so inspiring, you know, 'Win one for the Gipper.' That kind of loyalty, atmosphere and dedication inspires you to become a fan of Notre Dame."

After becoming a Notre Dame fan, Roselle would listen to games loyally, cheer for the team and read about the school. Roselle recalls that when he first began to follow Notre Dame the team was on a big win streak.

"As a young man I was caddying at Moon Brook, and I was on my way home when I thought I'd stop at the newsroom where they would post the football scores," said Roselle. "On the board was a final score that said Iowa 7 and Notre Dame 6, and I said to the guy, 'The game isn't over yet is it?' I was thinking Notre Dame can't lose. He said, 'Yes that's the final score.' The story behind that is that Iowa's Nile Kinnick kicked the extra point to win the game, and he didn't kick it like we see kickers today; no, he drop kicked it. And, if I'm not mistaken, the University of Iowa stadium is named after him. To beat Notre Dame was a big story."

In addition to being awarded a certificate of appreciation from Notre Dame, Barone presented Roselle with a framed collection of photos detailing his Notre Dame adventures.

"It is probably an accumulation of five home games that we went to," said Roselle. "It's a collection of all of our experiences there. We've had fun with it."

For Roselle, who joined WJTN in 1953, it was another meaningful reward for a lifetime of achievement in radio.

Roselle's connection to Notre Dame is just one of many special stories the Jamestown native has been involved with during his professional career. Thankfully, for those who have enjoyed his 60-plus-year tenure at WJTN 1240 AM and his 40 years conducting interviews at Chautauqua Institution, they can read about them in a memoir, The Best Times of My Life, which was published last summer. The book follows Roselle from his Depression-era boyhood on Franklin Street to journalistic and broadcasting eminence interviewing the most famous people in the world.

The memoir features many of Roselle's successes and recognitions, including his 2010 induction into the New York State Broadcasters Hall of Fame and his personal life story. In The Best Times of My Life, Roselle, as told to Walt Pickut, recalls memorable and historic conversations with a young Arkansas governor named Bill Clinton, the U.S. Poet Laureate, Billy Collins, and legendary songstress Judy Collins along with 40 of his more than 1,800 Chautauqua Institution interviews and hundreds of hometown broadcast conversations selected from the WJTN archives.

In addition to being involved in a number of civic activities, including a 25-year stint on the Jamestown Boys and Girls Club board of directors, Roselle did play-by-play for Jamestown High School football, Jamestown Falcons baseball, and provided radio coverage for Babe Ruth World Series, the Italian American Golf Tournament and area bowling shows.

Jim Roselle at work in his WJTN studio

Jim Roselle interviewed countless guests during his career. Here is a chance to see one of the places where that happened... the WJTN broadcast studio on Orchard Road in West Ellicott, just outside Jamestown, New York. Click on the image below to take a virtual tour. 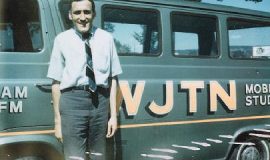 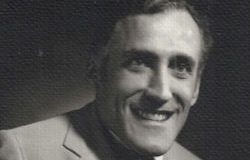 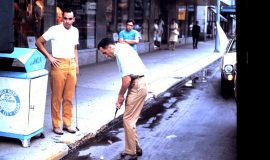 This 1971 photo shows Pete Hubbell and Jim Roselle engaged in a "goofy golf" putting contest that started at the old WJTN studios on West Third Street in Jamestown and ended at Maplehurst Country Club in the Town of Busti several miles away. The promotion was sponsored by Collins Sports Shop and was the idea of Dana Lindstrom, a Collins' employee. 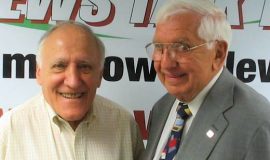 Jim Roselle with his WJTN Radio program Times of Your Life original co-host Russ Diethrick. The two friends got together each Saturday morning to share laughter, good stories, a tune or two and whatever, or whoever, came through the door. 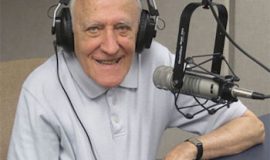 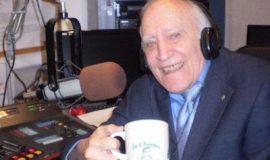 Jim Roselle in the WJTN studio with his cup of happiness. 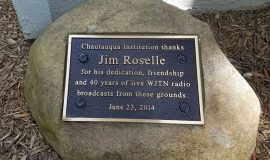 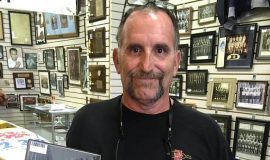 Jim Roselle's son, Jim Roselle, stopped by the CSHOF to honor his dad, the legendary WJTN radio broadcaster in 2017. 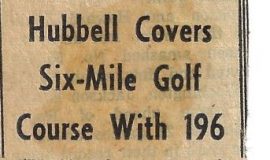 Jim Roselle Tribute: "In His Words"

Jim Roselle (2014) Interview on His Biography