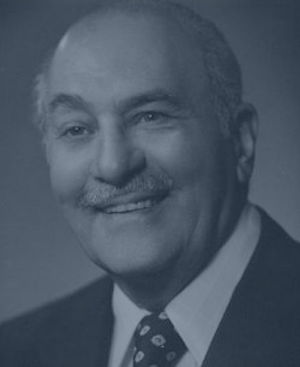 When one thinks of highly successful umpires in Chautauqua County one of the first names brought up is Joe Nalbone.

In 1928, Nalbone played for the Falconer Falcons of the Chautauqua County League and the following year for St. James in the Jamestown Muny A League. It was in 1930 that Nalbone started umpiring when he worked in the Chautauqua County, Jamestown Muny A and B Leagues along with the American Legion. In addition, he was manager of the Carnahan-Shearer team of the Junior American Legion and performed for the Jamestown Community Centers in the Muny Class A League.

Nalbone wanted to progress in his umpiring career, so he attended the Bill McGowan School for Umpires in Washington, D.C. in 1931 and received a degree. Later he was recommended to work in the first year of the PONY League (later known as the NY-P League) in 1939. His long career on a professional basis went from 1939-1985 as he worked under NY-P League presidents Bob Stedler and Vince McNamara.

Nalbone was involved in the longest baseball game on record in Chautauqua County, a 23-inning County League contest between host Cherry Creek and Sherman. Harry Brosius, a 1988 Chautauqua Sports Hall of Fame selection, was the winning pitcher.

In 1938, Nalbone umpired four games in one day with three in different communities. He began with a 10 a.m. game at Allen Park following that with a 1:30 p.m. doubleheader at Poland Center and then he did a 6 p.m. game at Steamburg.

Nalbone received a commendation from President Jimmy Carter in 1980 for 50 years of continuous service as an umpire.

He was a charter member of the New York State Chapter of Umpires and in 1978 had the honor of umpiring at Cooperstown's Hall of Fame Field, the Abner Doubleday Field. Also in 1984, he received an award for 50 years of service to the Democratic party and the Jamestown Community from former Jamestown Mayor Steve Carlson and the City Democratic Committee.

Nalbone also served as a Chautauqua County Legislator and on many committees of the Board of Legislators. He also had been the District 13 official.

Nalbone was instrumental in 1962 with the Ways and Means Committee in helping get the Resource Center started. He served as an agent to handicapped people. He volunteered his services with the Chautauqua County Nutrition Program and received a certificate of participation from the organization. Also, he had been a member of the St. John's Holy Name Society as program chairman and vice-president while serving on the St. John's Catholic Church Parish Council, having accomplished several projects. He was also a member of the Board of Directors of the Marco Polo Club.

Nalbone, who in 1985 was inducted into the Chautauqua County Umpires Association Hall of Fame, umpired games with his son, Robert, many times. 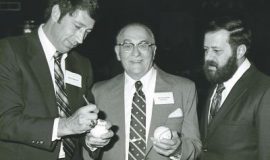 Joe Nalbone, center, and his son Bob, right, get an autograph from Bob Gebhard, Montreal Expos Director of Minor League Operations, at the 1983 Hall of Fame induction dinner. 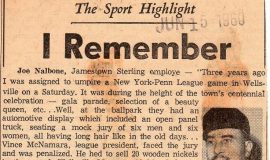 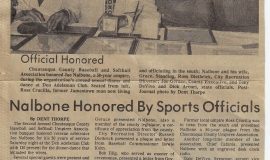 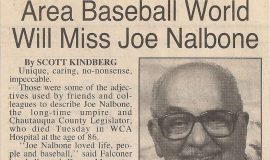