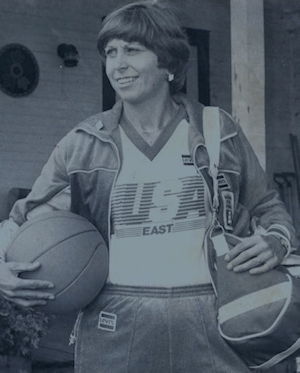 Kay Gould
b. 1945
Category
Coaching
Year Inducted
1982
Kay Gould is a graduate of Panama Central School and Brockport State. She is also the daughter of Brad Rendell, one of the other Chautauqua Sports Hall of Fame Inductees.

She was the women's basketball and softball coach at Allegheny College in Meadville, PA, and produced the first winning season in those sports and the team's participation in five NCAA national tournaments.

Prior to that she was the girls' basketball coach at Southwestern Central School and was the only Western New York coach to win four consecutive Section 6 titles (1975-79). She compiled a record of 94 wins and 10 losses in six years including a 41-game winning streak. Gould coached the Region 6 high school division team at the 1978 Empire State Games. In 1979 she coached the Region 6 college team to a silver medal at the Empire State Games and was chairperson for both the college and high school teams of Region 6.

She was an advisor for the State of Pennsylvania to set up the Keystone State Games which is similar to the Empire State Games. She coached the East Women's basketball team at the National Sports Festival in Indianapolis in 1982.

Her women's basketball coaching ability is well respected around the nation because she has been asked to speak at many college camps including Niagara University, Penn State, Ohio State and the University of Michigan. In 1975 she was appointed to the coaching staff for the World Junior Championships at the Olympic Training Center in Colorado Springs. Gould also served as the athletic director at Jamestown High School.

Kay Gould was inducted into the SUNY Brockport Hall Of Fame in 1990 and the Allegheny College Athletics Hall of Fame in 1991.

Kay Gould on the bench

CSHOF inductees Kay Gould (left) and Sheilah Gulas at Meadville, PA October 27, 2018. Sheilah joined her mentor, Kay, as an inductee of the Allegheny College Athletics Hall of Fame. Both Gulas and Gould established outstanding records as coaches of the Gators softball teams. 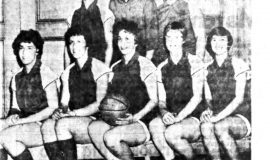 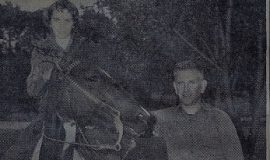 Kay Gould circa 1964 with her horse Beauty and her father, Brad Rendell. 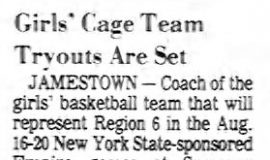 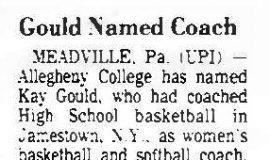 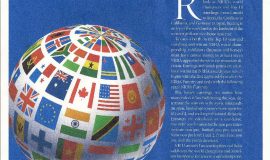 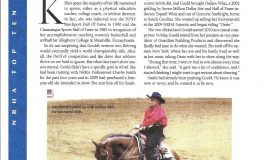 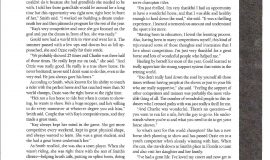