The Post-Journal
by Scott Kindberg
November 22, 2015

Friends Share Stories Of Impact Kenny Martin Had On, Off The Field

On Page 105 of the 1952 Jamestown High School yearbook is a photograph of the Red Raiders' varsity baseball team from the year before. I know that to be true, because Chautauqua Sports Hall of Fame president Randy Anderson dug the "Red & Green" annual out of the archives for me earlier this week and I saw it with my own eyes.As I read the names of the players from that 1951 squad in the caption, there were several that were familiar, including Greg Mulleavy, Bob Gunnell and coaches Colburn and Ayers. The person who stood out the most to me, however, was the guy standing in the back row, fifth from the right, wearing an ear- to-ear grin. 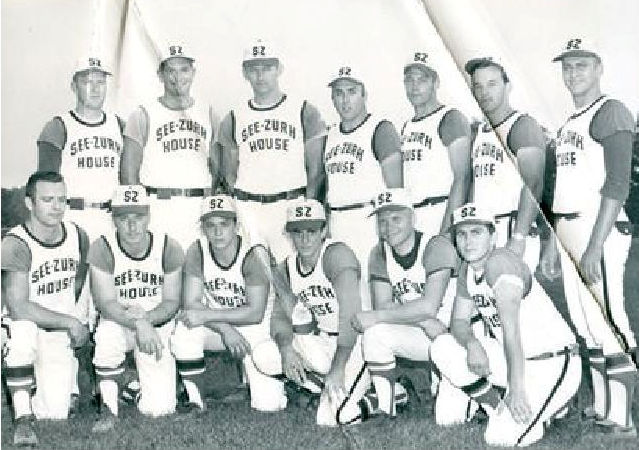 How appropriate, I thought, that he would be smiling for the team picture all those years ago, because that's precisely how I remembered him later on in life. It wasn't unusual for me to find Kenny, accompanied by his wife Gloria, enjoying a cup of coffee at Tim Hortons; taking in a sporting event or school activity in which his children or grandchildren were participating; or working as a member of the "chain gang" at JHS football games at Strider Field with, among others, his good friend, Bob Winterburn.

No matter the venue, Kenny was always smiling and always proudly sporting a Detroit Tigers cap on his head.

Sadly, I won't have those random meetings with my friend anymore. Kenny passed away Friday at WCA Hospital. He was 81.

Russell E. Diethrick Jr., also a 1952 JHS grad, had plenty of opportunities to play baseball with Martin growing up.

While Diethrick was embellishing just a bit, Kenny, a gifted shortstop, had that kind of range with a powerful arm.

"Whenever we were playing ball,'' Diethrick said, "we didn't have to worry when a scout came to the park and getting all nervous, because he wasn't watching us. He was watching Martin."

Kenny's baseball talents allowed him to play in the U.S. Army during the Korean War and to be signed by the New York Giants in 1956, but his allegiance to his roots was of utmost importance.

"He would sooner be in Jamestown than being on the Giants roster and in the Polo Grounds,'' Diethrick said.

And Kenny's hometown was the beneficiary, as baseball and softball fans watched him play into his 50s. In 1997, he was rewarded for his talents on the diamond by being inducted into the Chautauqua Sports Hall of Fame.

"When we played together,'' said Bob Schmitt, another CSHOF inductee, "I never wanted to play catch with him, because his throws came back like bullets. I did love sitting on the bench next to him, though. What a fine man he was. I think the one word I would use to describe Kenny is 'gentlemanly.'''

Greg Anderson, who worked the down markers at Strider Field with Kenny for 10 years, described his friend as "blue collar, stoic, humble, courteous and respectful."

"Lou Gehrig and Cal Ripken have nothing on this guy,'' Anderson said.

Former Post-Journal sports editor Jim Riggs wrote a story about Kenny in 2014, detailing the latter's 50 years on the sidelines as a member of the chain gang. For those keeping score at home, that is in the neighborhood of 225 games, dating back to 1964.

"'Just do your job,' was Ken Martin personified,'' Anderson noted.

Added Diethrick: "He was as valuable to the team on the field as he was in the dugout and vice versa. He was very supportive of everybody. It was never the play that he made to win the game; he would never indicate that. It was never his time at bat that drove in the winning run in the bottom of the ninth inning. It was always Kenny cheering for somebody else."

In recent summers, local attorney Greg Peterson has invited a group of area Tigers fans to his Lakewood home for lunch and a conversation with Jamestown native Dan Lunetta, who is a member of Detroit's front office. During that time, they discuss the Tigers' organization from top to bottom. Kenny was always one of the invitees, including the afternoon when he broke bread with a legendary ex-Tiger, Willie Horton. I was there, too, but as a fan of the New York Yankees, I was seen and not heard.

Fact is, Kenny didn't talk much either, preferring to take it all in.

"He was a gentle giant, who led by example,'' Peterson said. "His deeds spoke louder than his words."

Anderson recalled one of their conversations he had with Kenny while they were working the down markers at Strider Field, during which the latter admitted that Derek Jeter was the best player because the way he carried himself and for the way he played the game.

Funny, but I bet the former Yankees shortstop would have admired Kenny for the same reasons.