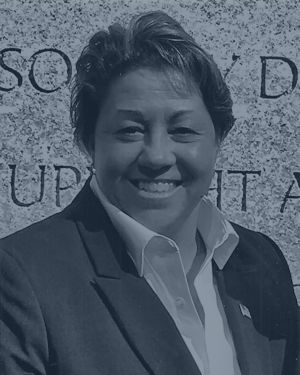 EDITOR'S NOTE: Portions of this article by Scott Kindberg originally appeared in The Post-Journal on May 14, 1993.

At any point in the last 13 months, Lori Franchina of Falconer could have given up, packed her bags, boarded the next bus in Willimantic, Conn., and headed home to Chautauqua County. And nobody would have blamed her.

For this was not a case of the 21-year-old Eastern Connecticut State University two-sport star shirking her academic responsibilities or throwing a temper tantrum because she was not getting enough playing time on the basketball court or on the softball diamond. This was about survival.

Simply put, nothing could have prepared Franchina for the real-life nightmare she has endured.

First, it was the facial injury she suffered in March 1992 when she was struck with a bat during a softball practice. The accident left her with 32 fractures, including a shattered left cheek, two breaks in her nose, a broken palate, broken sinus cavities and a couple of broken teeth. Franchina required one major surgery in which three metal plates were inserted into her left cheek and two more in her right, and a screw inserted in her upper jaw. She still suffers from numb teeth and sinus headaches.

Franchina received a medical redshirt for the remainder of the softball season, but after a four-month recuperation, she was back in time for practice on the ECSU women's basketball team.

Then, on Nov. 11, 1992, another tragedy struck. Her softball coach, Jeff Anderson, who had guided the Warriors to one national title and five regional crowns and was named the Division III National Coach of the Year, in 1992, died after losing a battle with cancer. He was 33.

Still, there was more.

Earlier this year, a teammate of Franchina's on the basketball team died, followed in April by the passing of an assistant softball coach's wife, who had a brain aneurysm and died while watching the Warriors play.

In softball, it's three strikes and you're out. Nobody said anything about four. Not surprisingly, though, Franchina has learned to seize every moment. Rather than being devastated by her injuries or the tragedies that have nipped at her heels for more than a year, she has remained philosophical.

"I almost got to the point where I didn't know if I'd get through another one," said Franchina, the daughter of Tony and Terry Franchina. "But you can't keep saying, ‘What if, what if?'" You just have to dig deep and go on and never say die. As long as you're here, it can all be taken away.

"My (late) coach had such an outlook in life and instilled in me the that (the injury) was never a negative. I was still alive and able to excel. He told me I could focus my energy — because I have a lot of it — in something else."

Fortunately for Franchina, she has been able to continue to focus that energy in sports. Thanks to an incredible inner strength and desire, she has become one of the school's finest athletes. Wearing a protective mask, the 1990 Falconer Central School graduate played in all 27 basketball games last winter, averaged eight points and was a co-captain.

"I had six months of basketball with the mask, so the comfort was fine," she said. "It was more of an emotional thing with me. I was different than the other athletes. I didn't like that I stood out."

It took her a while to realize that she wasn't standing out as much as she was outstanding. In softball this spring, Franchina — mask and all — returned to her familiar spot in center field and is hitting .412 as the Warriors head into the regional playoffs this weekend. Her efforts earned her a place on the New England Intercollegiate Softball Association All-Star first team.

"It's been a tremendous year," Franchina said. "Our team has stuck together so strongly. We've come to understand there's nothing we can do about (the tragedies). In order to go on, we have to team together."

They appear to be doing just that. Entering this weekend's playoffs, the Warriors, who have won 11 straight regional titles, are 24-8, ranked seventh nationally in Division III and are poised to make a run at the national championship in Anderson's memory.

"This is not a pipe-dream," Franchina said. "Our team is one of the best I've ever seen. I have confidence to my right and to my left (in the outfield) and those that hit in front of me and behind me."

And if there were any doubts about Franchina's resolve, all anyone had to do was watch her performance in last week's ECSU Invitational. With the Warriors trailing, 4-3, in the bottom of the seventh inning, Franchina stepped to the plate.

"I wanted contact, I was totally focused, I looked for my pitch," she recalled.

And with her mother in the stands, Franchina lined a two-strike pitch over the fence for a game-winning, two-run home run.

I think she's back, folks. All the way back.

As a postscript, following are some of Franchina's other athletic accomplishments:

A resident of West Warwick, R.I., Franchina is the daughter of Tony and Terry Franchina of Falconer. 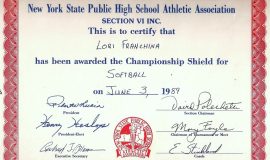 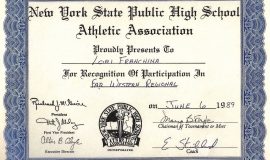 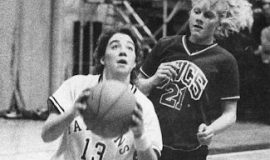 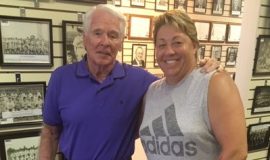 Bill Race and Lori Franchina at the CSHOF exhibit hall on August 2, 2019. 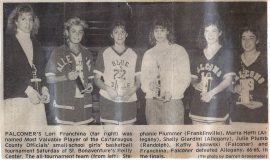 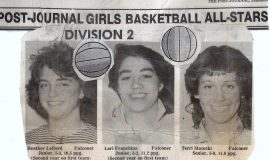 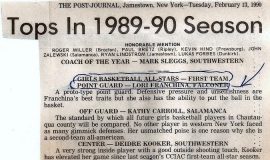 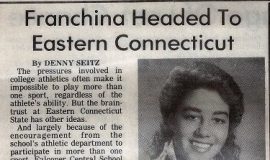 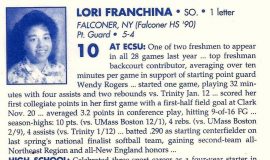 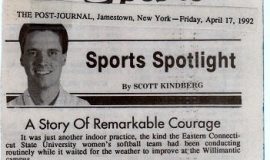 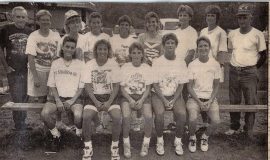 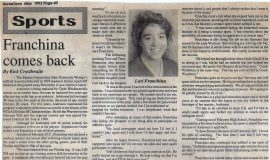 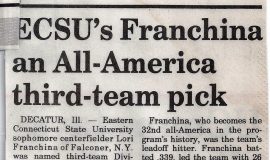 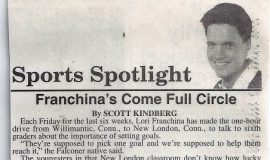 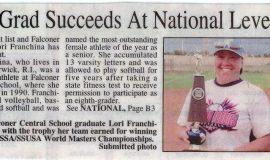 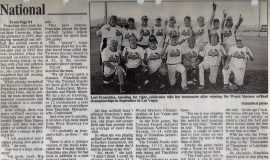