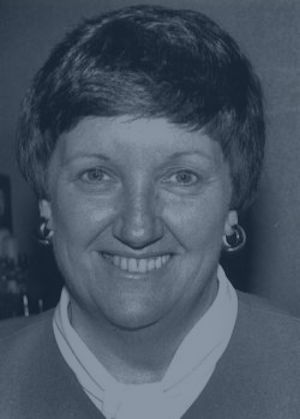 With the induction of Marilyn Gould Hale, the Chautauqua Sports Hall of Fame had its first ever husband-wife inductees in the history of the organization. In 1987, her husband, George, was inducted for his outstanding achievements in horseshoe pitching.

Hale earned this prestigious honor for her work in the sport of smallbore rifle and pistol competitive target shooting since 1954.

Hale began her shooting career at Bradford Senior High School where she graduated in 1956 and holds many state titles, both in Pennsylvania and New York State.

In 1955, Hale was the National Rifle Association National Junior Indoor Smallbore Position Champion and the Girls Sectional kingpin in the Indoor Two-Position Division.

The year of 1956 was indeed an outstanding one as Hale captained the Bradford Girls Rifle Team to a national junior girls record score of 738. She shot 99 prone and 90 off-hand for a 189 total, which was the highest score of the event, as the Lady Owls won a second straight National Rifle Association crown. Also, she won the aggregate trophy with 189-184-373.

She was the NRA National Jr. Indoor Smallbore Position Champion and claimed the aggregate and Girls Sectional crowns in Indoor Two-Position. She was also captain of the Indoor Two-Position Sectional Championships. Hale won the NRA National Junior Outdoor Smallbore Position Championship and was the sectional winner for the Girls Indoor Four-Position.

On August 19, 1956, she competed against 1,500 men and women at Camp Perry, Ohio, for a position on the Randall Rifle Team, which would qualify her for the Olympics. She just missed by points of becoming the fourth member of the team 18-or-younger.

The same year, she was the Pennsylvania Girls and Class A champ, was third in Class A Girls individual matches and was on the eight place NRA National Junior Postal Matches squad.

She competed for the University of Rochester and was entered in the school of nursing at Strong Memorial Hospital. While there, Rochester met the Bradford boys team and Marilyn shot a perfect score in prone.

Also in 1957, she won the NRA Distinguished Rifleman Medal for being one of the top junior rifle shooters. In order to win the highly-acclaimed honor she had to shoot at hundreds of targets over several months and climb through 14 NRA junior rankings.

Nationally, she ranked fifth in the Girls Division of Outdoor Four-Position with a 365 to earn a bronze medal.

It was also in 1957 that she became a student nurse at WCA Hospital and was a member of the Jamestown Community College rifle squad.

In 1970 and 1971, she won the New York State Rifle and Pistol Association Gallery Rifle Ladies Championships and in 1975 won again along with the Master Class crown.

The Western Division Sporter Rifle League saw Hale become the women's champion from 1973-1975 with the later year being a Division Shoot-Off and a Master Class Championship.

Hale captured a Kneeling and Prone Division Championship at the Chautauqua County Rifle League in 1964 and 1968. She won the Northwest Invitational Tournament in 1962 and was a member of the Jamestown Pistol championship 22 caliber squad of the Westem New York-Penn Pistol League in 1961. That same year she was on the championship team in the Expert Class of the NYS Rifle and Pistol Association Gallery Rifle Tournament.

Championships continued to mount for Hale in the Western Division Sporter Rifle League as she was Ladies Champion again in 1976-1977 and the league's Ladies Shoot-off victor in 1976-1977. She was second in the Master Class of the Division Shoot-off those two campaigns.

Hale has been heavily involved in volunteer work, having been the past president of the Southwestern Division of the American Heart Association, a board member for both the Southwestern Division and New York State Affiliate and in 1983 earned the status as Volunteer of the Year from both organizations. She has been the chairwoman of the Emergency Cardiac Care Committee, an instructor-trainer for the Basic Cardiac Life Support and an instructor for the Advanced Cardiac Life Support, which provides training and assistance for Emergency, Medical and Rescue Personnel in the three counties of the Southwestern Division. Also, she has participated in screening clinics for the American Cancer Society.