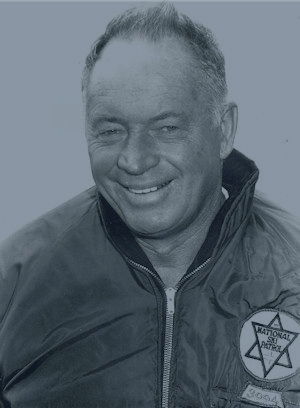 EDITOR’S NOTE: The first part of this article by Frank Hyde originally appeared in The Post-Journal in 1952.

Canada's former amateur ski jumping champion has come down to earth and gone in the cattle business - at Panama.

Ask him why, and quiet, soft-spoken Ramsay Riddell tells you: "I don't know. Always wanted to be a farmer and land was too high back home."

"Back home" is Canada, cradle of strong men and home of some of the world's finest skiers.

So Ramsay Riddell of Canada's outstanding athletic family that include a nationally known golfer, skiier, hockey player and football coach, has become farmer Riddell - first of the Riddells to turn to the sod.

Ramsay and Jimmy Jr., hit the ski lanes; Tommy played golf; and pop, that's Jimmy Sr., coached a pro football team. He introduced the forward pass to Canadian rugby football and was the first coach to lure an American college star to Canada.

But Ramsay always dreamed of being a farmer, so one day he and his charming wife, Eileen, nickname "Billy," packed up, took their 2-year-old son and came to the United States.

They knew Jamestown's Marion Fisher and he handled the legal phase of their transaction at Panama. Why Fisher? Because brother Tommy had played and defeated his son, Robert C. Fisher, in the New York State amateur tournament in 1938. Robert, former president of Moon Brook and local insurance man, is one of the area's more widely known amateurs.

Ramsay, now 32, knows his top-flight competing days are behind him. But even the helter-skelter of making a living in these tax-riddled times can't shut a man off from his memories.

There was a time when Canadian newspapers were setting 60 temp streamers about the jumping Riddells, Ramsay and Jimmy, after the latter had pushed his way in among the grizzled veterans of the soaring runners and walked off with the Canadian Open title in '38, and Ramsay had cleaned up at the amateur meets.

Then there was the Eastern Canadian finals during the early days of the war. Ramsay went over to Toronto and filed his entry. The committee kept still. They didn't want to scare him away. But after he signed, someone told him four of Norway's finest stars, Air Force pilots stationed in Canada, had entered. They didn't know the Riddell clan. Ramsay never batted an eye - just went out and won the thing.

There followed the Laurentine Zone championships, then the St. Lawrence Valley meet before Ramsay turned his eyes toward the grand daddy of them all in the East - the George Washington Cup jumps at Lake Placid.

If the Riddells scared easily, Ramsay would have had water on the knees that day. In the superlative field was the magnificent Toger Tokle, who held 24 records, including the North American mark of 289 feet when he made the supreme sacrifice for his country with the U.S. Ski Troops in the Italian mountains, and Joe Perrault, the iron man from Iron Mountain, Mich.

Tokle won that day, but he had to set a meet record of 232 feet that has never been surpassed. And when they posted the finals, up among the five leaders they wrote: "Ramsay Riddell, Canada." Ramsay made his greatest jump that day - over 200 feet - but this was the "major leagues."

There's no money in being an amateur, so Ramsay turned to the Canadian Navy during the war, switched to Canadian Merchant Marine when the shooting ended, then came home. His education at McDonald Agricultural College, a unit of McGill University, had fitted him for the life he wanted but a last fling took him into the Canadian championships at Quebec City in 1948.

After the sale of his farm, Riddell worked as a signal specialist for Conrail Railroad for many years. Riddell became involved in the organization of the Peek'n Peak Ski Center in 1962 and also served on the board of directors at Peek'n Peak for several years. His personal contributions and accomplishments are many, including: founder of the Peek'n Peak Ski Patrol and Patrol Director until 1989; a key man for Peek'n Peak in building the good people-to-people relationship necessary between a ski patrol and its customers; and cited as the Eastern Division Patroller of the National Ski Patrol System Inc. for 1982.

Riddell was also chosen out of more than 8,000 ski patrollers in the Eastern Division; and received recognition for his invention of a fruit ladder that was used for chair lift evacuation, which was acclaimed the safest and fastest method at that time. Many of the areas in the Northeast ski country adopted the use of this device.

Riddell organized and directed many first aid and refresher courses annually for his patrollers and visiting patrollers, and taught first aid courses for the fire department as well. Riddell's sports involvement wasn't limited to skiing. He also assisted with the organization of the first Midget Football team in the area and played hockey on a local Jamestown team. 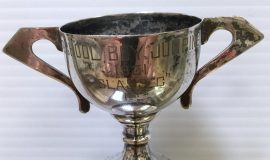 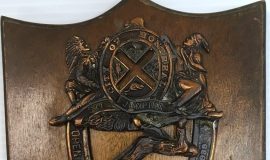 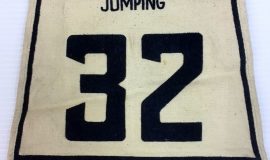 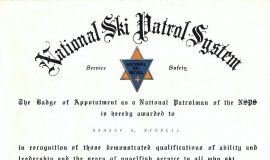 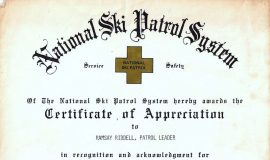 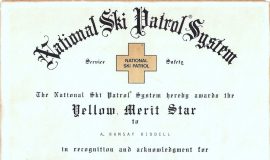 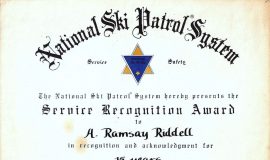 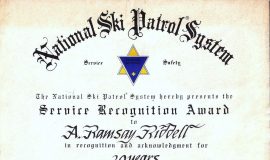 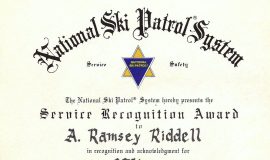 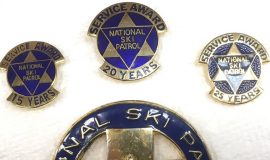 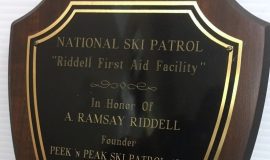 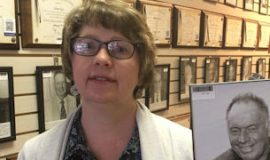 Nancy Nelson, daughter of Ramsay Riddell, with photo of her dad at the CSHOF. 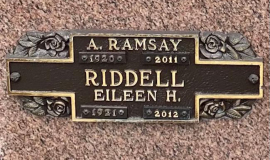 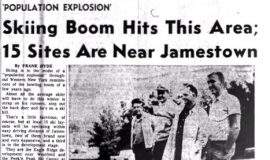