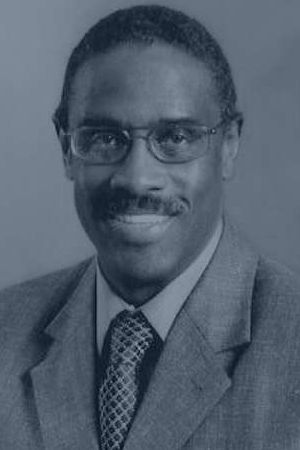 Ron Graham
b. 1948
Category
Track & Field
Year Inducted
2005
The Jamestown High School graduating class of 1966 was one of the largest in the school's history and among that group of talented individuals came Ron Graham, who became a tremendous asset to the area youth.

Graham was not only concerned about collegiate prospects, but also how all the other athletes in the program were doing. A dream of Graham's was to have an artificial track surface and that became a state-of-the-art sports complex at Jefferson School on Martin Road in Jamestown in 1990. Graham helped design and chaired the process to build Strider Field that cost $1,500,000 for an eight-lane, all-weather track and an artificial turf complex.

He has had nearly 30 years of experience and background in design, development and implementation of youth initiatives with an emphasis on athletics, academics, delinquency prevention and performing arts. Graham has coached eight TAC/ USATF individual event national champions and a national championship relay squad for the Chautauqua Striders. He coordinated the implementation of the 2000 USATF National Junior Olympics, which had 7,000 athletes, and the 2003 Youth Athletic National Championships, which had 2,000 athletes, at the University of Buffalo.

Graham was a member ofthe USATF National Board of Directors from 2000-2003, a USATF Region 2 coordinator from 1999-2002 and USATF Niagara Youth chairman from 1993-2001. He also founded and directed the Western New York Jets Track Club in 1991. Graham has been involved in other programs in the community such as Vision Mentoring, Love School Urban 4H and the Jamestown Public Schools Youth Apprenticeship.

Before helping form the Chautauqua Striders and the Jamestown Youth Bureau, he was an outstanding athlete for Jamestown High School, earning several varsity letters in basketball and track. He still holds several of the school's top 10 performances in track. After graduating from Jamestown, Graham went to Jamestown Community College where he was outstanding in basketball and track (1966-1968) and in 2000 was selected as one of the school's top 50 athletes. Graham led the JCC men's basketball team in scoring and won a NJCAA Region 3 title in track. Then, Graham graduated from Baldwin-Wallace College in 1972.

Originally from Corinth, Mississippi, Graham was very athletic even at seven years old and wanted to play basketball at the Jamestown YMCA. However, he didn't have enough money to get in but Jamestown YMCA youth director Spiro Bello showed his concern for the youngster and they struck up a deal. Bello allowed Graham to play if he would hang up coats for an hour each Saturday morning. That allowed Graham to work for his membership and taught him responsibility. Just as important was that Graham had a role model in Bello, which was very important for a fatherless youngster. Later on people such as Bo Bo Hunter, Herb Cunningham, Terry Ransbury, Russ Diethrick, Frank Hyde and George Bataitis all had an impact on Graham as he was growing up. Graham now joins Ransbury, Diethrick and Hyde as an inductee of the Chautauqua Sports Hall of Fame.

At the time of his induction, Graham continued to serve are youth as the Arts Council for Chautauqua County's Director of Youth Services and the director of the Infinity Performing Arts Project. That program started back in 1998 when he met seven young singers through the Chautauqua Mass Youth choir project and they became known as Infinity. They performed gospel and R&B songs first through vocals, but soon accompanied by keyboard and drums. Graham assisted the group for the next two years by arranging performances and rehearsals and bringing in more adults to instruct. Graham eventually brought Infinity very successfully to an after-school and weekend activity program. 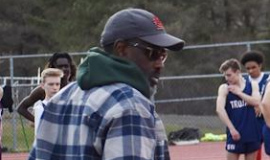 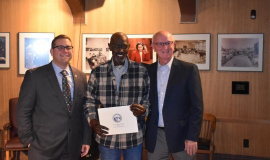 Ron Graham was presented with a proclamation by Jamestown mayor Eddie Sundquist thanking him for his lifetime of service to the youth of Jamestown. Assisting with the presentation was Randy Anderson, president of the CSHOF where Graham is a 2005 inductee. October 12, 2022.