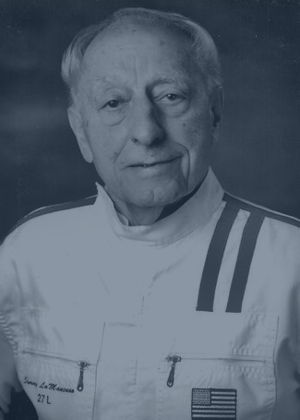 EDITOR'S NOTE: The following article by Scott Kindberg originally appeared in The Post-Journal in April, 2016.

To commemorate his 80th birthday in December 2009, Sammy LaMancuso of Jamestown sat down with local historian Greg Peterson for a question-and-answer session regarding the former's stock car racing career.

At some point during the filming, LaMancuso and Peterson were joined by Mike LaTone, a good friend who had an idea for a special project in recognition of the former driver's four-decade career at area dirt tracks.

Specifically, it was LaTone's dream to restore LaMancuso's Dodge Charger, which had been collecting dust in the latter's Arnold Street garage since the Nixon Administration, and LaTone, along with other friends and family, wanted to give LaMancuso one last chance to steer his beloved 27L around Stateline Speedway.

But first Peterson and LaTone had to get LaMancuso's permission to pull the vehicle out of "retirement." So, with Peterson's video camera running, their abridged conversation went something like this:

PETERSON: We're going to have a 10th anniversary (Stateline) movie premiere (in September 2010). To create the aura, we need to get your car up and going and we'll travel to this event.

LATONE: Will you make me crew chief? If you say yes, in the spring I'm taking charge of it and it's going to happen.

LAMANCUSO: There's no engine in it!

LATONE: The car will have an engine... and I have a body shop that has agreed to do the work on it. I think it's going to be exciting.

PETERSON: The police chief has already agreed to a police escort. We've got this covered.

LAMANCUSO: They better have a fast car, tell them.

As laughter filled the room, LaMancuso and LaTone shook hands, confirming the deal.

By August 2010, LaMancuso drove the newly restored, yellow 27L on to the Stateline track where he participated in a match race with Dick Barton, another area racing legend. Not surprisingly, LaMancuso took the checkered flag that day. Six weeks later, he drove his car through downtown Jamestown where he was ultimately greeted by hundreds of people, who had assembled for the premiere of the Stateline documentary at the Robert H. Jackson Center and to support the legacy of one of the track's most popular former drivers.

"What an honor to even hear that word (legacy)," LaMancuso told Peterson during their interview. "I'm glad I had an effect on somebody."

Thanks to the effort of the Stateline Legacy Fund - specifically Peterson, Randy Anderson and Randy Sweeney - the Chautauqua Sports Hall of Fame and a host of sponsors, LaMancuso's legacy has been preserved, courtesy of a DVD entitled: "Sammy, The Movie."

The 83-minute documentary, produced by PC Projects, includes racing footage; a chronology of the 27L restoration; interviews with LaMancuso, his family, his friends, former drivers and track officials; a conversation between LaMancuso and Gov. Andrew Cuomo; and the Jackson Center reception following LaMancuso's "last lap" in the Dodge Charger in September 2010. A 35-minute "bonus" segment with LaMancuso's old crew completes the video.

As nephew Dr. John LaMancuso put it: "We were blessed to be raised in a family with Uncle Sam in it." 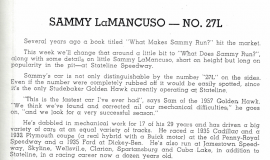 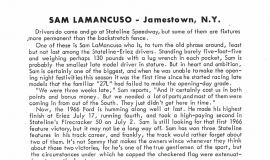 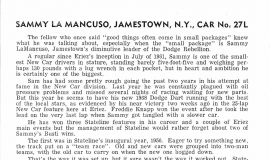 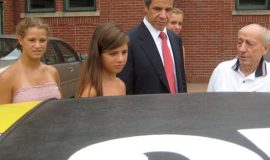 Courtesy of Greg Peterson, the following series of videos chronicles the 2010 restoration of the 27L and its reappearance at Stateline Speedway.