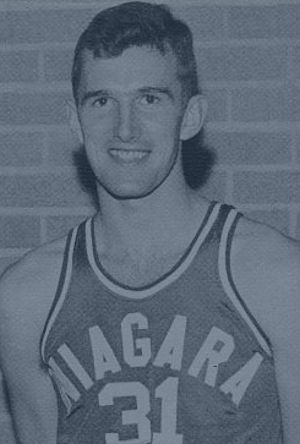 Clem Worosz
b. 1935
Category
Basketball
Year Inducted
2018
When Clem Worosz was a kid growing up in Dunkirk in the 1940s, he found his way to South Roberts Road - the west side of the avenue to be exact - where there was a large tree. Nailed to it was a bushel basket, sans backboard.

The width of the road was the court.

A basketball career was born.

To say the young Worosz got off to a fast start in the sport, however, would be an overstatement. In fact, when he tried out for his Catholic Youth Organization team, Worosz was told that he would never make it as a basketball player.

Guess who had the last laugh?

To prove his detractors wrong, Worosz not only turned out to be a gifted player during his high school days at St. Mary's Academy and Cardinal Mindszenty, but he parlayed it into a fine collegiate career in the 1950s at Niagara University. The recipient of a full scholarship with the Purple Eagles - one of four awarded after a five-day tryout - Worosz performed in two National Invitational Tournaments and two Holiday Festivals in Madison Square Garden, and was captain of the team his senior season.

Along the way, he played with the likes of Larry Costello, a future NBA all-star and coach; Hubie Brown, an NBA Hall-of-Famer and TV analyst; and Tom Prechtl, a Chautauqua Sports Hall of Fame inductee; and was coached as a junior varsity player by Frank Layden, who went on to coach the NBA's Utah Jazz, and by Taps Gallagher, who guided Niagara to a ranking as high as 16th during the 1956-57 season.

The opponents Worosz faced during his career were equally impressive. They included, among others, Jack Twyman, Tom Gola, Tom Heinsohn and a guy by the name of Jim Brown. Yes, THAT, Jim Brown, the Syracuse All-American, who is recognized as, arguably, the greatest running back in NFL history. To demonstrate, Worosz' athletic ability, a photographer captured an image of the Dunkirk native blocking Brown's shot during a game at Onondaga County War Memorial in Syracuse in 1956.

Upon completion of his college career, Worosz was a longtime coach for Little League and Babe Ruth League baseball teams in Dunkirk, and also coached Midget Football League for four years. A former first lieutenant in the Army, Worosz also worked for AL Tech Specialty Steel of Dunkirk as a supervisor of strategic product planning. Married since 1960, Worosz and his wife, the former Marianne Zirker, have five children — Ken, Kevin, Karen, Sonja and Sandra. 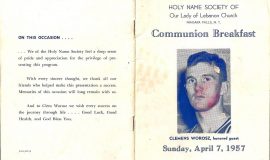 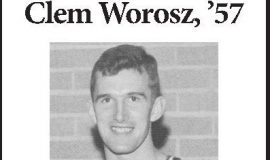 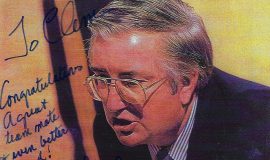 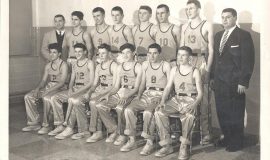 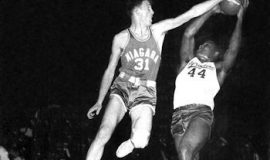 Clem Worosz blocks the shot attempt of Syracuse's Jim Brown during the 1950s. 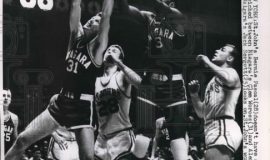 Clem Worosz #31 pulls down a rebound. 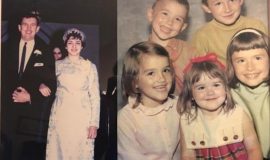 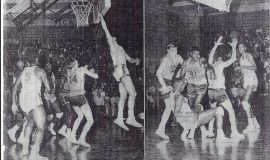 Eagles In Action In Losing Clause. Clem Worosz making basket in photo on left. Gary Clark is on left in photo on right. 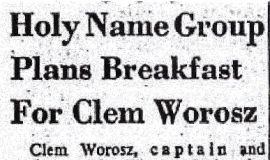