The Post-Journal
by Randy Anderson
February 15, 2020 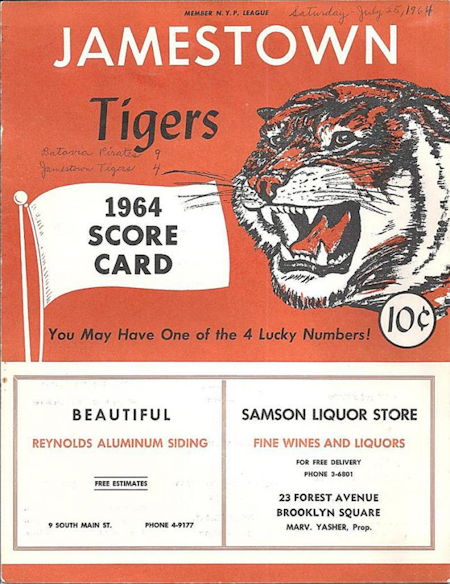 John O’Neil returned as general manager of the 1964 Jamestown Tigers. He worked like crazy to convince fans to support their hometown team. One idea was to reward season ticket holders with a cigarette lighter – a promotion that could never be duplicated in today’s world. He had moderate success, boosting attendance to 34,000, an increase of 3,000 from the season before.

Another promotion he organized was “Johnny Newman Night,” a tribute to the popular home run king of the 1941-42 Jamestown Falcons. Newman, who made Jamestown his home following his baseball retirement, had recently been discharged from the local hospital. The Newman Night was designed to raise funds to help Johnny with his medical bills. Former Newman teammates, John Pollock, Dick Schmidt and O’Neil attended the event to lend their support to their beloved friend. Sadly, Newman succumbed to his illness three years later.

The ’64 “Baby Tigers” were managed by former major league player Jack Phillips. A 68-60 record landed the squad in fourth place in the six-team NY-P League standings. The mediocre results were attributed to a lack of talent on the diamond. Not a single member of the 1964 Jamestown Tigers advanced to the big leagues.