The Post-Journal
by Randy Anderson
October 4, 2019 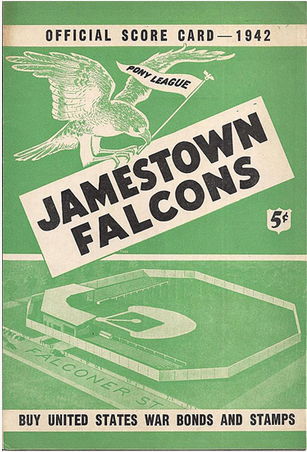 Baseball fans came out in record-breaking numbers in 1942 to see the Jamestown Falcons, an affiliate of the Detroit Tigers. More than 143,000 fans went through the turnstiles during the regular season and another 16,000 watched the playoff action as Manager Greg Mulleavy’s “Falks” captured both the regular season and postseason titles.

Power-hitting “Big Jawn” Newman, seen in photo below, was a crowd-favorite at Municipal Stadium. He led the league in batting average and home runs in both 1941 and 1942. He was given the key to the city and made honorary mayor, fire and police chief, and even dog catcher. Newman, a native of Chicago, made Jamestown his home and was a well-known bus driver and Babe Ruth League coach in his later years. Newman was inducted into the Chautauqua Sports Hall of Fame in 1988.

Two other names familiar to Jamestown baseball historians, besides Newman, could be found on the ’42 roster: third baseman Ted Wyberanec; and left-handed pitcher Lyle Parkhurst, also inductees of the Chautauqua Sports Hall of Fame.