The Post-Journal
by Randy Anderson
October 19, 2019 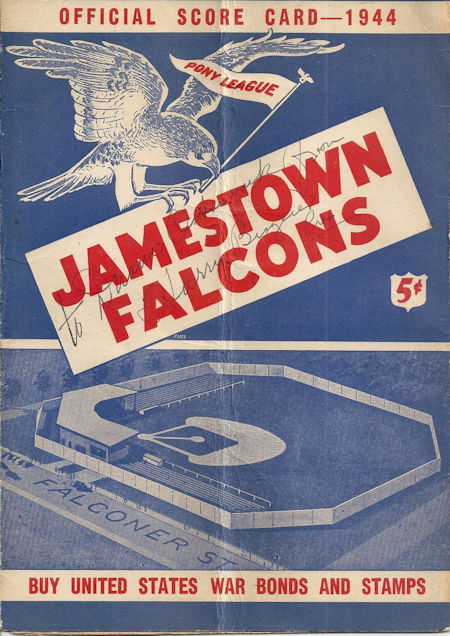 The 1944 Jamestown Falcons, under manager Ollie Carnegie, finished in second place during the regular season but dominated post-season play to win the Governor’s Cup as PONY League champions.

Among the stars of owner Harry Bisgeier’s team was a 5-foot, 4-inch centerfielder from St. Thomas, PA. Nellie Fox batted .304 for the Falcons and was soon on his way to a 19-year major league career as a second baseman. The 1959 American League MVP for the Chicago White Sox was the first of two players to make it from Jamestown to Cooperstown when he was inducted into the Baseball Hall of Fame in 1999. The other former Jamestown player to be enshrined is Randy Johnson who played at College Stadium during the 1985 season.

The star pitcher for the ’44 Falcons was “Lefty” Lyle Parkhurst, a 20-game winner including 8 shutouts. After his playing days were complete, “Parky” became a locally well-known baseball umpire and basketball referee. He was elected to the Chautauqua Sports Hall of Fame in 1982.