The Post-Journal
by Randy Anderson
October 26, 2019 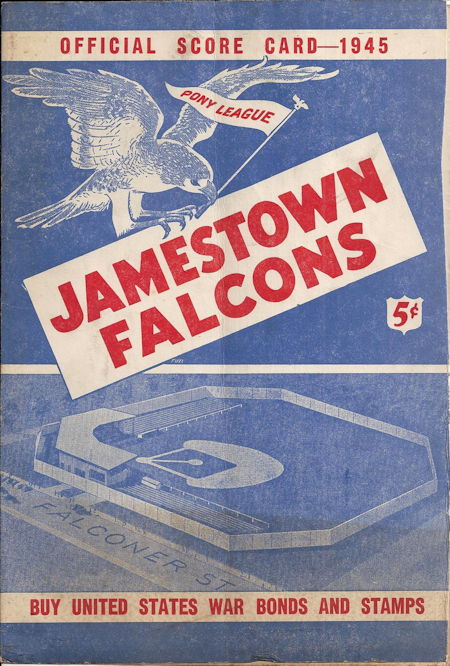 The 1945 Falcons of playing-manager Jim Levey, finished in second place. They were led by the PONY League batting average champion Barney Hearn (.352) and the loop’s leader in hits and total bases, Ken Humphrey. Chautauqua Sports Hall of Famer, Lyle Parkhurst, was the ace of the staff with an 11-4 record.

Dunkirk’s Mark Hammond, another selection to the Chautauqua Sports Hall of Fame, was the team’s business manager.

Baseball history was made at Municipal Stadium on July 10, 1945 when umpire Ross Badger of Gastonia, NC, married his hometown sweetheart, Lucy Hubbard, at home plate. The bride and groom were escorted through an archway of baseball bats by players of the Jamestown Falcons and Batavia Clippers. Over 3,000 fans witnessed the nuptials and contributed $166.46 to the couple’s honeymoon trip to Niagara Falls. The unusual ceremony received front page coverage in The Post-Journal with stories by both the paper’s society editor, Roberta Johnson, and its sports editor, Frank Hyde.