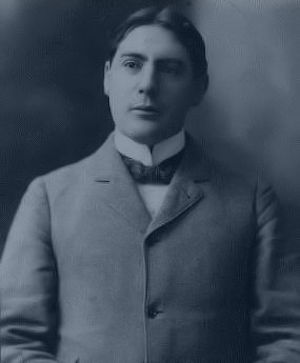 In between, the man known as "the grandfather of football statistics," had an immense impact on how the history of the college game is chronicled.

Upon graduating from Jamestown High School, Davis attended Princeton University where he obtained his bachelor's and master's degrees. While there, he was a member of the football team, which was coached by Woodrow Wilson, who would later become the 28th president of the United States; was a leading boxer, who once sparred with champion John L. Sullivan; and was a member of the tug-of-war team.

Of those three activities, football clearly was his favorite. In addition to college coaching for six - he compiled a 37-11-3 record with Wisconsin, Amherst and Lafayette where he won a mythical co-national championship with an 11-0-1 record — he also served as Lafayette's athletic director for four years and later served as Princeton's representative on the Football Rules Committee from 1909-1915. During his tenure, the committee divided games into quarters, numbered players, shortened the field to 100 yards and established end zones.

After concluding his six-year career as football coach, Davis became a prominent attorney in Easton, where Lafayette is located. He also served as the district attorney for Northampton County.

Despite no longer calling the shots from the sidelines, Davis' impact on football was only beginning.

In 1911, he wrote Football, The American Intercollegiate Game, which was the definitive book on the history of college football (1869-1910). A year later, he compiled the first college football statistics in Official Spalding's Football Guide and in 1913 helped select the college football All-American team.

In addition to authoring football articles for Encyclopedia Brittanica, Davis covered football games for newspapers and reported on games for radio; wrote "50 Years of Intercollegiate Football" for Spalding's Official Football Guide in 1926; created the all-time team for Illustrated Football Annual in 1931; and authored "Set All the Records Straight" in Spalding's Football Guide two years later, which retroactively named national championship teams from the 1869 through the 1933 seasons.

Married to Edith Detwiller on June 29, 1898, Davis fathered four children - Elizabeth in 1899, Katharine in 1901, John in 1904 and Cynthia in 1906. Princeton University scheduled a "Parke Davis Day" for Oct. 13, 1934, but David died in June of that year. Rather than attend the planned celebration in New Jersey, college associates, former football stars and members of the bench and bar were among the friends who arrived in Easton as mourners for the June 8 funeral services. 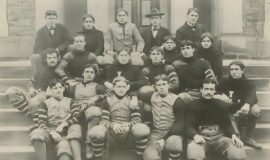 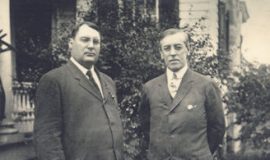 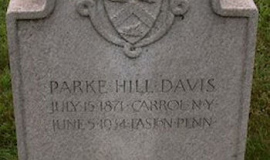 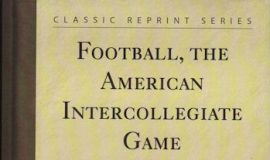 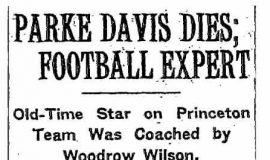 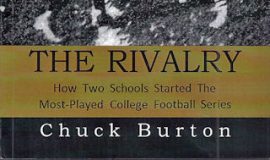 The Rivalry donated to the CSHOF by author Chuck Burton, has an interesting section on the years that Parke H. Davis was the Lafayette football coach. 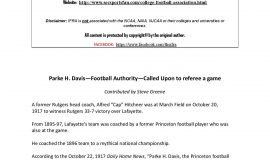 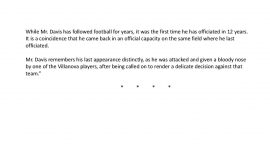