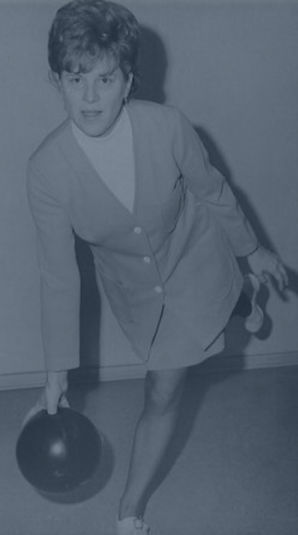 Sue Golen Bastedo
1933–2020
Category
Bowling
Year Inducted
2004
Sue Golen Bastedo was born on December 19, 1933, in Gowanda and was the eighth child born to Mr. and Mrs. Robert Vogtli. She graduated in 1951 from Gowanda Central School, where she was a cheerleader for four years and participated in intramurals as a pitcher in softball and a forward in basketball. During her high school years, Bastedo worked for Dr. Joseph Bellanca, a dentist, and went on to the Buffalo Institute of Technology to earn a major in dental hygiene. Then she returned to Gowanda and for six years worked in the business office at Gowanda State Hospital. She later came to Jamestown and that is where her outstanding achievements in bowling and golf began.In 1993, Bastedo was an overwhelming choice in being selected to the area Jamestown Area Bowling Council's Hall of Fame. She had high average and series awards for years while participating in league play. She was a member of the Professional Women's Bowling Association plus she taught the game to others and helped further junior bowling as an instructor.

Bastedo became the first local woman to go on the pro bowling circuit in 1973 and that same year placed second in an event in Akron, Ohio. She also a member of the Buffalo team that placed fifth in the National Tournament in 1965. Additionally, she delivered a 698 on the pro circuit at Wichita, Kansas

When Bastedo was competing she would have several 600s a week during league bowling when 600s were not as frequent as they are now. In one season alone, around 1968, she had the incredible total of 33 600s series.

Bastedo was Jamestown city champ four times and carried a 190 average three different years. She bowled in the Pennsylvania State Cancer championship, placed second in the New York State Cancer Tournament and competed on the Beat The Champ television program.

Bastedo was chairman of the American Cancer Tournament in 1994 that raised $7,000 for the American Lung Association. In golf, Bastedo was club champion at Conewango Valley Country Club in 1991, 1992 and 1993 and was runnerup in 1983, 1984 and 1985. She was second in Division 2 of the New York State Amateur Tournament and was the most improved golfer at CVCC one year with handicap going from 18 to 13.