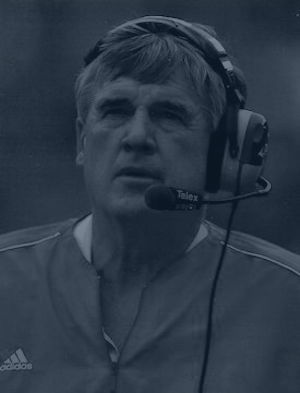 But they're not about how well he chased a little white ball around the course on the shores of Lake Erie or the adventures he experienced when he and about 150 alums from the neighboring schools made a beeline for the clubhouse when torrential rain prematurely ended their day.

This has nothing to do with golf.

Rather, for nearly three-quarters of an hour, the Class of '66 Cardinal Mindszenty graduate regales a reporter about his football experiences that date back more than 50 years. He talks about growing up in Gowanda and then his years playing at the now-closed Cardinal Mindszenty for Coach Bob Muscato; and then he describes his coaching stops at some of the highest-profile college programs in the country, which led to a distinguished career calling the shots in the National Football League.Yet, one experience still stands out as No. 1, the moment when he says "the light came on." It's also when his eyes still well with tears decades later as he recalls the day he found himself in a cramped office on the campus of Ohio State University.

It's the day Woody Hayes, the Buckeyes legendary former coach, gave a young Palcic some advice.

Upon graduating from Cardinal Mindszenty, Palcic moved on to the University of Dayton where he played football. It was there that he realized that while he wasn't good enough to play professionally he desperately wanted to become a coach. So he worked hard and enlisted the help of Dayton coaches like Tom Moore, Len Fontes, George Perles and John McVay. Between them, those men went on to earn 11 Super Bowl rings.

"I got associated with these great, young coaches in college and I said, 'You know, I want to be like those guys,'" Palcic recalled. "They knew that I was serious about being a coach."

Beginning as a high school coach in Dayton, Palcic ultimately landed college jobs at the University of Dayton, Ball State, Wisconsin, Arizona, USC, UCLA and SMU; spent two years in the CFL where he coached the Toronto Argonauts in two Grey Cup games, winning one; served coaching stints in the NFL with four different teams; and even was a consultant with a professional team in Slovenia this past winter.

That's not a bad resume for a self-described "small-town kid."

"It all started here," he said.

"When I was in fifth or sixth grade, Mindszenty had these great teams," Palcic said. "I went to a game when they played St. Joe's in Buffalo. Mindszenty got beat, but I said, "That's for me. That's what I want to do.'"

And that began Palcic's love affair with football.

Along the way, he came to admire some of the Southern Tier's finest athletes and coaches, including Chautauqua Sports Hall of Fame inductees Bob Wisniewski, Joe Sanfilippo

"I still remember Bill Bergey coming down to my house and saying, 'Bobby, I'm going to New York City. I've got my scrapbook here... and there's a coach's convention and I'm going to see if someone will give me a chance to play college football.'"

The trip to the Big Apple paid dividends for the Pine Valley Central School graduate.

Bergy earned a scholarship to Arkansas State and was an All-American there; was drafted into the NFL and played for Cincinnati and Philadelphia; was a starting linebacker for the Eagles in Super Bowl XV; and was voted All-Pro numerous times.

"There were so many guys who helped me," he said. "I was in the right place at the right time. I worked at it, but they really, really helped me. Whenever I was on the road when I was coaching college football... I'd always go to the pro football headquarters (in that city) and talk to their coaches, and they opened up to me."

His lessons learned, Palcic has been a coach in demand for decades. Along the way, he has mentored three Outland Trophy winners, including Joe Thomas, the All-Pro tackle with the Cleveland Browns, and watched another tackle he had coached, Jonathan Ogden, inducted into the Pro Football Hall of Fame in Canton, Ohio. Toss in those NFL stops in New Orleans, Detroit, Cleveland and Atlanta and it's clear that Palcic is well-respected within the game.

"I'm going to show you a picture," said Palcic as he opened up a scrapbook. "It's something I treasure more than anything I've ever done."

He flipped to a page that included a photograph that was taken years ago at Rich Stadium, home of the Buffalo Bills.

"I was coaching for the Atlanta Falcons and a bunch of friends of mine go to (the game) and they (hold) up a sign... I was on the sidelines and a photographer comes up to me and says, 'Coach, take a look up there?'"

Palcic cast his eyes toward the stands and located the sign.

What did it say?

Palcic's last collegiate coaching gig came in 2012 when he was an assistant for June Jones at Southern Methodist University. The team was good enough that year to earn a berth in the Hawaii Bowl.

It would turn out to be his final game.

But Palcic wasn't really, truly done with the game.

There was the 2013-14 season when he was an volunteer assistant at Dunkirk High School and then in 2015-16 when he was a volunteer coach at a high school in Dayton. And earlier this year, he spent several months working with a professional team in Slovenia. He helped during training camp, wrote a playbook and helped coach a few games before returning to the United States. Not before, however, he paid a visit to the home where his grandfather and great-grandfather once lived.

"I was at practice one day and a couple guys show up," he recalled. " ... They said they were relatives of mine."

Before he knew it, Palcic was taken to his family's hometown where he was greeted by 25 people who all shared the same last name.

"It was unbelievable," he said. "There was a smorgasbord, a band and they were singing all those Slovenia songs that I remember when I was a kid."

Football and family were merged half a world away.
— — —

Now 69, Palcic still has his hands in the game he loves, doing reports on the country's top high school players for a tech company that provides software and hardware for major colleges and the NFL. He also works some summer football camps.

"When I look back on it, it's unbelievable how fortunate I was to coach with the coaches that I did and the players that I got to coach," he said. "I just think, man, that was a great time and I'm thankful for it and I still love the game. It's something I know I can't do forever. There comes a point where it's time."

While he's not wearing a headset on Saturdays or Sundays anymore, Palcic hasn't forgotten some of the lessons he learned as he climbed up the coaching ladder.

Which brings us back to that old Ohio State football coach we talked about at the beginning of this story.

Palcic's meeting with Woody Hayes more than 30 years ago never would have happened were it not for Dave McClain. Palcic worked with McClain when the latter was the head coach at Ball State and Wisconsin, and the pair had built up quite a relationship over the course of seven years together.

But when Palcic was recommended for a job as an assistant coach with the Buckeyes, he had to pursue it.

"I called Dave and I said, 'Coach, I need a favor,'" Palcic recalled. "He goes, 'I know what you want. Don't think I don't know for one second what's going on. You want me to recommend you to Ohio State, don't you?'

"He hung up the phone and he called me back and said, 'Listen, I just got off the phone with Ohio State. They're really interested in you and I think you've got a great shot.'"

An hour passed and Palcic received another phone call, except this one contained awful news.

One of the last things he'd done before he passed away was to help one of his trusted staff members get a job with a rival school.

"I get choked up talking about it," Palcic said.

When he arrived in Columbus after being hired as a member of the Buckeyes' coaching staff, it didn't take long before he had a face-to-face meeting with Hayes.

"I'm there 24 hours and I get a knock at the door," Palcic said. "I'm told that the 'old man' wants to meet the new line coach. I go to his office and he lectures me... on everything."

Finally, when he was given a chance, Palcic told Hayes about the path he had taken to get to Ohio State, including McClain's role in all of it.

I said, 'Coach Hayes, I'm honored to be here,'" Palcic recalled, '"but what troubles me the most is that I'll never be able to repay Dave McClain for what he did for me.'"

With tears rolling down his cheeks, Hayes poked his finger in Palcic's chest and said, "Young man, you don't pay back, you pay forward. Make sure you do for others what Coach McClain did for you."

It appears Palcic took that advice to heart.

"I've lived by that forever," he said. "I've always tried to help other people. As a matter of fact, I did a pretty good job for Urban Meyer, because he was my graduate assistant (at Ohio State)."

Yes, THAT Urban Meyer, a man who has won three national championships in his career — two at Florida and one with the Buckeyes — and is always in the conversation for more.

The post-golf tournament lunch is over and now it's time for various folks — alums of Dunkirk, Fredonia and Cardinal Mindszenty — to step to the podium in the banquet room at Shorewood CC. Stories, jokes and laughter fill the air. Once fierce rivals during their high school years, the men are now the best of friends.

"We all respect each other for what we do," Palcic said.

It's all part of paying it forward. 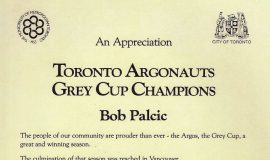 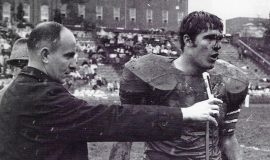 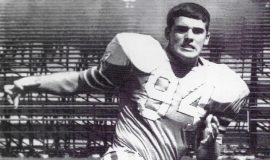 Bob Palcic at University of Dayton, 1971. 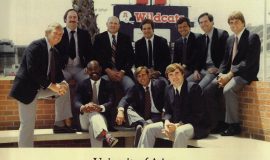 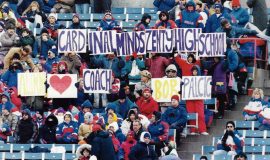 Sign in crowd at Buffalo Bills game at Rich Stadium, 1995. 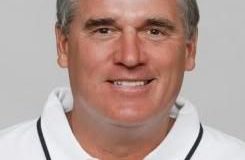 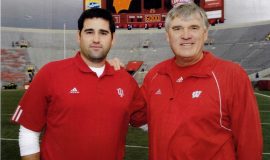 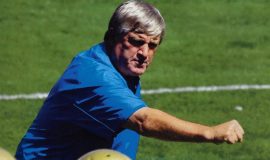 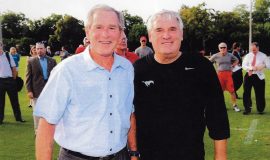 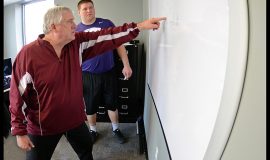 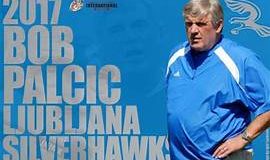 Bob Palcic head coach of the Ljubljana Silverhawks from Slovenia, 2017. 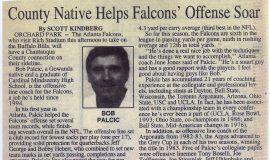 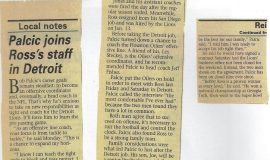 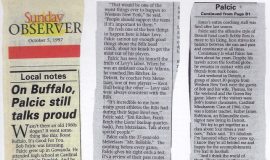 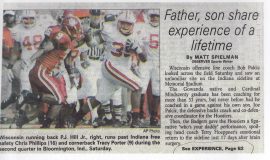