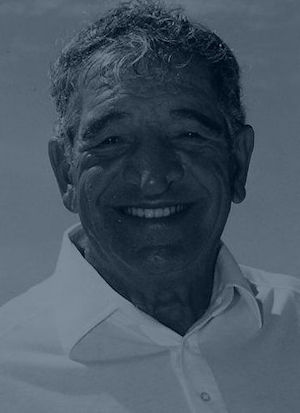 Joe Sanfilippo
1923–2015
Category
Coaching
Year Inducted
2003
Joe Sanfilippo retired from the high school football coaching ranks in 1982, but when one thinks about the top coaches his name is always brought up for his accomplishments. Sanfilippo had incredible success while winning numerous championships at Gallup, New Mexico, Salamanca and finally at his alma mater, Jamestown High School.Sanfilippo was an outstanding football player for Jamestown coach Dent Moon and in his senior season of 1942 was named co-captain with Pete Wilson. That season the Red Raiders compiled a 6-1-1 record for the first winning season that the school had since being 6-3 in 1934.

In Sanfilippo's final game he kicked the winning field goal from 18 yards away with 1:50 left to give the Red Raiders a 10-7 victory over Erie Academy. That field goal in a downpour on November 20 was believed to be the first made by the Red Raiders since Neil Brown connected against Olean 16 years earlier in 1926.

Sanfilippo played tackle in his final game after being an end all season. Of course, that tackle position wasn't new to him as he was stationed there during his junior season.

Not only was Sanfilippo outstanding in football, but also in other sports. He ran track for the Red Raiders for three years and was a Chautauqua County doubles champion in tennis. At 16, he also was second in the City Senior Tennis Doubles and at that same age played baseball for the Jamestown Spiders. Sanfilippo went to Batavia to tryout with the Batavia Clippers of the PONY League, but was sent home when it was found out he was just 16.

After graduating from Jamestown in 1943, Joe attended San Jose State where he played football and tennis.

Sanfilippo enjoyed great success while coaching at Gallup as he won a pair of state championships and was runnerup another time.

In 2002, Gallup had a Joe Sanfilippo Day in recognition of his success there. Sanfilippo also coached at Forestville, but it was at Salamanca where he brought a slumping program back to incredible success.

He was at the Salamanca helm for 17 years and captured 11 titles in making the Warriors one of the most respected programs in Western New York and across New York state.

Among his players for the Warriors were former pro football player Chuck Crist and his son, Carl Sanfilippo, who became a very successful coach at Baldwinsville.

When the Jamestown position opened up with the resignation of Dick Noonan, Sanfilippo was definitely interested in returning to his alma mater. So in 1975, Sanfilippo was named the coach and started the groundwork for Jamestown football that had been so successfully carried on by his former assistant Wally Huckno, who himself was inducted in the Chautauqua Sports Hall of Fame.

Things started out on a struggling note for Sanfilippo the first year with a 1-8 record, but after that the Red Raiders starting surging en route to becoming a powerhouse in New York. Over the course of the eight years (1975-1982) that Sanfilippo was at the helm, the Red Raiders compiled a superb 48-22-2 record. But over the the final five years, he put together a brilliant 30-7-1 mark that included two Division 1 crowns and four one-loss campaigns They were 7-1-1 in 1978, 8- 1 in 1979, 9-1 in 1981 and 8-1 in 1982. Twice his teams reached the final game of the season undefeated only to lose in heart-breaking fashion.

His teams were 2-1 at Ralph Wilson Stadium with his final game as coach in 1982 a 34-12 win over Clarence in the Section 6 Playoffs. On that team were Connolly Cup winner running back Berto Amoroso and Western New York Player of the Year fullback Ken Johnson. Both were All-State first-team selections that year.

Sanfilippo was named Coach of the Year twice at Salamanca and once more at Jamestown. He started the well-known Big 30 Football Camp in 1971 at St. Bonaventure University and was later run by his son, Carl. Some of the coaches that have worked at the camp are Jim Tressel, the coach of Ohio State, Louisiana State and Alabama coach Nick Sabin and collegiate quarterback coach Ray Dorr.

Sanfilippo has always been a favorite speaker at football clinics, speaking to more than 2,000 coaches at Atlantic City on what it takes to win. He has spoken at the National Football Clinic, which used many of his lectures at a graduate course. Additionally, he has spoken to coaches throughout Ohio with the main one being the State of Ohio Football Coaches Clinic in Cleveland.

For three years, he was president of the Western New York Football Association. A Navy veteran for three years on a destroyer, Sanfilippo also played Santa Claus for over 20 years at the YMCA. 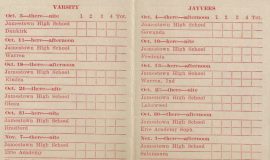 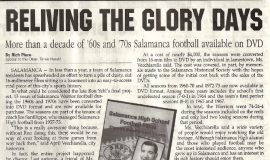 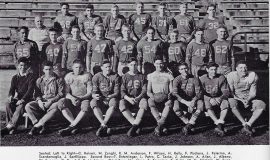 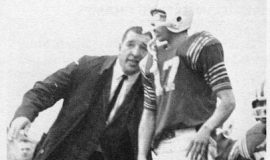 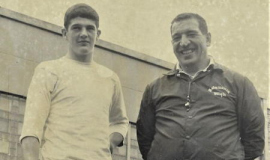 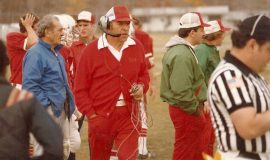 Joe Sanfilippo, wearing the headset. At left in blue jacket is his brother Sam. At right, over the official's shoulder, is Wally Huckno. Photo from 1982. 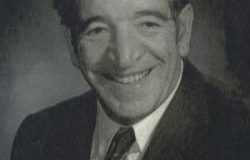 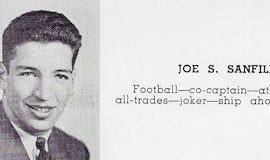 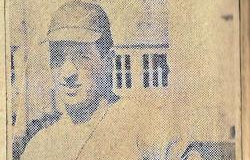 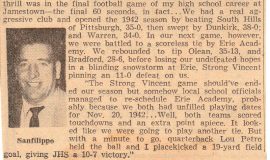 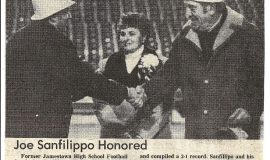 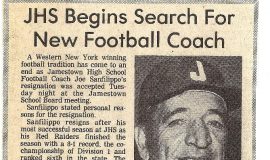