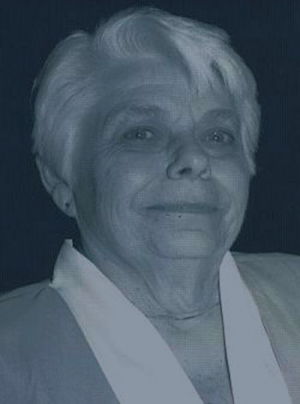 For the second time in a very distinguished swimming career, Shirley Smith has the honor of being selected to a Hall of Fame. Prior to being inducted in the Chautauqua Sports Hall of Fame, Smith was inducted as a high school official in the Swimming Hall of Fame in Fort Lauderdale, Florida, for the 1988-89 season. She was endorsed at the time by the Jamestown Area Chapter of Swimming Officials and received the New York State Distinguished Service Award.

Born in Buffalo on July 25, 1929, Smith lived in several places as a youngster because her father, Willard May, was a minister for several churches.

Smith began swimming competitively with an AAU club in the Philadelphia area from 1936-40 and in 1940 moved to the Albany-Troy area where she was a member of the Tri-City AAU Swim Club. Due to World War II, competition was mostly local and she racked up several ribbons.

Smith swam some meets in Chautauqua County during the summer when she visited her grandparents in Mayville. Competitions were staged at places around Chautauqua Lake such as Mayville, Lakewood, Bemus Point and Chautauqua. At one of the meets she took home first place in the backstroke. It was in Chautauqua County in 1940 that she received her first lifesaving course from Tex Dain, who coached several different sports in the Jamestown school system for many campaigns.

Smith moved to this area for good in 1945 and has been here ever since, teaching her knowledge of the sport to youngsters at the Jamestown Boys Club and the YMCA. She coached age group swimming as a volunteer coach at JBC with the Chautauqua Sports Hall of Famer Tony LeVoie, with the Greater Jamestown Swim Club, with Bill Rollinger and at the YMCA from 1955-85.

She officiated for high schools, YMCA, AAU and USS for more than 30 years. She was also a New York representative for the Jamestown Chapter of Swim Officials and helped plan and teach officials training in both high school and United States swimming. From 1955-85, Smith taught Red Cross WSI, First Aid and Instructor training. Smith was chosen the Official of the Year for the Niagara Area of U.S. Swimming in 1985-86 and was a delegate-at-large for the U.S. Swimming Convention. She was on the national committees for insurance and the national championship coordination committee. That marked the fifth convention which she attended and was her second year on the committees. The event covered the sports of swimming, diving, water polo, synchronized swimming and masters swimming.

In 1989-90, Smith worked a trio of big swim meets across the country. She officiated the U.S. Open International Meet in Orlando, Florida, the U.S. Seniors Nationals in Nashville, Tennesee, and the U.S. Junior Nationals East in Cleveland. Previously, she had worked at the National Junior Olympics at Austin, Texas, the NCAA Division 2 championships at the University of Buffalo and the Empire State Games. Additionally, she worked the Olympic trials in 1984 and 1988.

She was on the staff of 22 Red Cross National Aquatic Schools and a memher of the Commodore Longfellow Society and received its James Tattersall Certificate of Appreciation for 25 years of service to the teaching of swimming, life saving and first aid.

Smith served on the executive board of the Jamestown Area Chapter of Swimming Officials and on all of its committees. She scheduled officials for both boys and girls meets for Chautauqua County and also officiated. She served as the New York State representative for the Jamestown Area chapter.

The two years prior to her induction, Smith worked the girls state meets. Smith remained active working national meets as either a deck referee, administrative referee or as chief judge and doing at least three a year. She was the chief judge at the World University Games in Buffalo in 1993. She was also chief judge for the U.S. Open in Buffalo. In March 1995, she worked the Junior Nationals in Buffalo as an administrative referee and in August the Pan Pac's International Meet in Atlanta. Smith was on the National Officials Committee for U.S. swimming and in January 1995 was at the committee meetings in Colorado Springs helping that committee rewrite parts of the instructors manual for teaching officials.

When not involved with swimming, Smith enjoys raising and showing Schipperke dogs. She is very proud that the dogs raised and shown along with the ones sold have done very well on the show circuit. 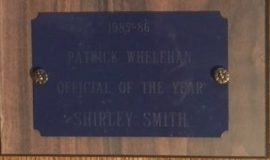 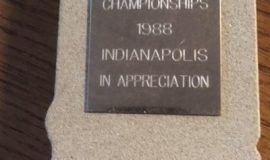 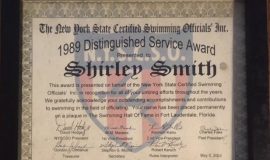 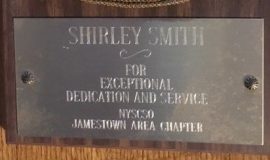 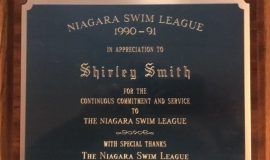 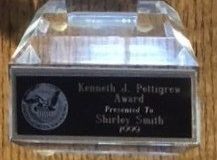 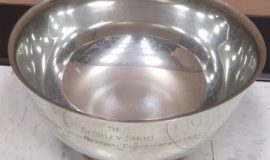