The Post-Journal
by Randy Anderson
December 24, 2019 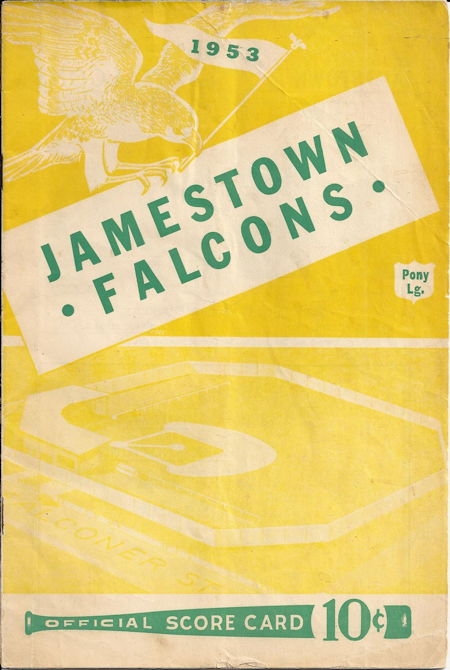 Following two successful seasons, manager Tony Lupien surprised the Jamestown faithful by accepting a job with the rival Corning Independents. His replacement for the 1953 season was Buffalo-born Danny Carnevale. Falcon fans last saw Carnevale in 1949 when he managed the Bradford squad to the PONY League title while also leading the loop in hitting that season.

Carnevale quickly had the Jamestown rooters forget all about the popular Lupien as the Falcons started strongly and never took their foot off the gas. They finished with an 88-37 record, the most dominant team in league history to date, and roared to the Governor’s Cup championship.

While playing a game in Hamilton, Ontario during the playoffs, the Jamestown bus was burglarized. Jovial Falcons bus driver Jerry Klein reported that over $3000 in valuables and cash were stolen. For once, Klein had nothing amusing to say.

Jamestown outfielder George Alusik led the PONY with a .384 batting average while Vince Trakan was the workhorse of the pitching staff posting 19 victories.

A highlight of the season was the induction of the first two honorees of the newly formed Jamestown Sports Hall of Fame sponsored by the Retail Merchants Association of the Greater Jamestown Chamber of Commerce with assistance from Post-Journal sports editor Frank Hyde. New York Yankee outfielder Irv Noren, a Jamestown native, was the “modern day” selection while former MLB pitcher Swat Erickson, a Swedish immigrant to Jamestown, was the “old-timers” choice.